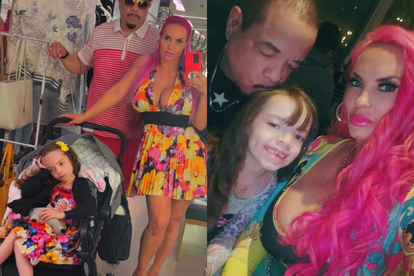 Coco is catching smoke for pushing her 6-year-old in a stroller. Images via Instagram: @coco

Coco is catching smoke for pushing her 6-year-old in a stroller. Images via Instagram: @coco

Strollers are really helpful for moms who don’t have the energy to carry their heavy babies all over and also serve as a nice trolley to carry nappy bags and other everyday travel items. Coco Austin clearly loves a stroller and shared a snap of her six-year-old daughter Chanel still sitting in one.

It goes without saying that many people found a six-year-old in a stroller pretty strange and didn’t hesitate to point it out.

Coco Austin is once again being mommy shamed online for raising her daughter Chanel the way she wants to.

This after Coco headed to Instagram to share a photo of herself, her rapper turned actor husband Ice-T, and their daughter Chanel having fun on a day out.

“A stroll through the @atlantisbahamas shops…” Austin, 43, captioned the pic, which was shared via Instagram on Sunday.

“Chanel is so over it unless there’s something cool to see,” she continued, referencing her daughter’s annoyed expression.

Critics instantly spotted the child in the pram and made sure to mock Coco over the decision to have her grown child in a stroller.

“She looks like she’s over being in a baby stroller

“I know she may be your last baby but you have to let her grow up. If anything a wagon is more her age!” a third suggested.

I would hate for your sweet baby to get bullied or something.”

Not her first mommy shaming

This isn’t the first time Coco has caught smoke for her parenting style and was previously grilled that she had breastfed Chanel until she was over five years old.

She was also trolled for getting Chanel’s toes manicured and for allowing Chanel to co-sleep with her and Ice T.