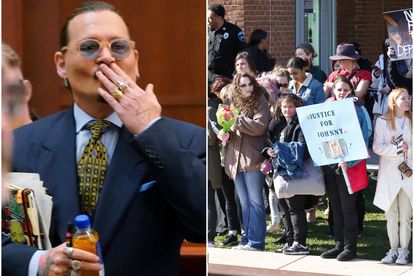 Johnny Depp has attracted a legion of female fans at his defamation trial in the US.
Image by: Steve Helber, Paul Morigi/AFP

Johnny Depp has attracted a legion of female fans at his defamation trial in the US.
Image by: Steve Helber, Paul Morigi/AFP

Johnny Depp superfans – or some would argue stalkers – have gone to extreme lengths to catch a glimpse of their idol during his defamation trial at the Fairfax, Virginia court in the US

Some have even flown across the country and snubbed work in the hopes of being allowed into the courtroom.

Amber and Johnny are embroiled in a $100 million joint defamation lawsuit after the latter accused her of “ruining” his reputation. This, after his ex-wife claimed in a Washington Post op-ed that she was a “domestic abuse survivor”. In return, Amber is counter-suing Johnny after his legal team labeled her claims an “elaborate hoax”.

SUPERFANS GO ALL OUT

It’s not secret Johnny Depp has the support of hundreds and thousands of adoring fans during his court trial. But only a lucky few make it inside the court room.

That’s because fans have to camp outside the court at night to be one of 100 allowed in the courtroom in the morning. In fact, the Virginia court had to put out strict instructions banning fans from arriving before 01:00.

Others have spent hundreds and thousands of dollars and even taken unpaid leave to be a part of the event. Ivan De Boer told People that she has “no regrets” about spending $30 000 so far to attend the trial. She said: “I took my whole year’s vacation so I could be here for Johnny. I’m single, so I do what I want to.

“No regrets. I’d regret it more if I wasn’t here.”

Another fan – Sharon Smith –  flew across the world from the UK to the US. Sharon queues outside the courthouse at 01:00 every day to ensure a spot inside the courtroom. She said of her costly commute: “I’ve been coming back and forth [to Virginia] from Los Angeles so you’re looking at $600 to $700 each time, 10 hours of our life in the air. Hotel, food, drinks, about $10,000”.

A third – Jennifer- admitted to spending $2000 on a new wardrobe in the hopes of getting Johnny Depp’s attention. She told the publication: “As a person who has been through domestic violence herself, it just needed to be something that I did. I’ve been here since the start of the trial.

Others sleep in their cars to save money and save time. “It is not totally convenient to be in Virginia for most of the week, but I was sleeping in my car when I came here. It’s worth it”, a woman by the name of Jarva said.

And whilst his supporters thrive on catching a glimpse of him as he heads in and out the courtroom or during breaks each day, Johnny Depp continues to give his fans what they want: attention.

The star has been spotted smiling, waving at, and even hugging a few fans outside the courtroom. The star has also received a number of gifts from fans; from teddy bears and chocolates, to even a visit by a pair of alpacas!

According to MailOnline, Johnny Depp often arrives at court each morning blasting loud music in his car before greeting his awaiting fans.

“I just made breakfast for all of them this morning. Waffles”, he joked to reporters last week of his die-hard supporters.