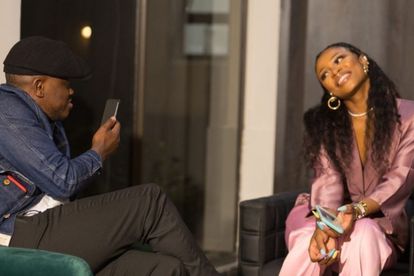 Ntombezinhle Jiyane, popularly known by her stage name DJ Zinhle, took to Instagram to show off her bae Bongani Mohosana, professionally known as Murdah Bongz, in a sweet birthday tribute on 9 June.

ZINHLE: ‘I AM SO INCREDIBLY THANKFUL FOR YOU’

DJ Zinhle has been lowkey about her love life since her relationship with the father-of-her-child AKA ended. The businesswoman took to Instagram to show her new bae, Black Motion’s Murdah Bongz, just how much he means to her.

The Umlilio hitmaker posted a picture of herself with a big smile alongside Murdah.

“Wishing you a birthday that is as out of this world as you are. I am so incredibly thankful for you. Happy Birthday my love. ❤️ #Asante,” wrote DJ Zinhle.

She thereafter posted a similar picture to her Instagram Story with an even bigger smile!

“Hope you had a special day @murdahbongz,” she wrote.

Murdah Bongz then posted a screenshot of her story to his Instagram with a sweet caption.

DJ Zinhle commented “love, you baby” on the post that received over 26 400 likes.

DJ Zinhle and Murdah Bongz reportedly started dating in June 2020 and at first attempted to keep their relationship out of the public eye. However, in December 2020 the couple went “Instagram official” when Murdah shared a picture of DJ Zinhle.

In April this year, Murdah Bongz gifted DJ Zinhle an “amazing and thoughtful” self portrait that she put on display in her home.

A few weeks ago, the musician posted a picture with a rather poetic caption.

“He is like the morning star, the star. Like the rays of the axis in the cold winter. Beautiful and loving Jiyane. My heart,” read the caption when directly translated into English.

HARDWORKING COUPLE ON THE MOVE

The couple never skip a beat when it comes to supporting each other and the pair have each been hard at work.

Zinhle has become a jack of all trades with the release of her sunglasses and watches collection called ERA by DJ Zinhle, the expansion of her Boulevard Nectar Rosè brand and most recently, her new wig range called Hair Majesty by DJ Zinhle.

While Murdah Bongz teased fans with his interpretation of a yet unknown song.

ALSO READ: ‘Piss on Your Grave’: Why did AKA return to socials with THIS song?