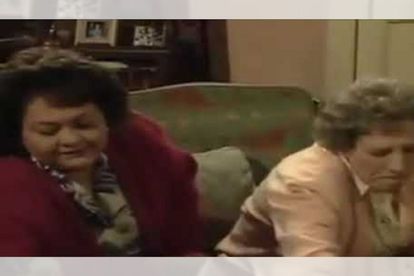 Take a trip down memory lane with a throwback of Nenna and Elsa unknowingly eating a dagga cookie on Egoli: Place of Gold.

After Shaleen Surtie-Richards sadly passed away on Monday 7 June 2021, tributes began to pour in for the actress from various people who met her. Many fans also took to social media to celebrate her life and legacy. In one instance, a throwback scene in which she portrayed Ester ‘Nenna’ Willemse on Egoli made headlines.

The scene shows Nenna and Elsa Du Plessis Pienaar (played by Hannah Botha) in a ridiculously funny scene where they eat cannabis cookies by accident.

“RIP Nenna, the world is changing to much… My childhood anty [sic], crying,” said one YouTube user in the comments section of the video.

“RIP our national treasure,” said another.

Surtie-Richards, who is also commonly known for her role as Fiela in the 1988 film Fiela se Kind, suffered from diabetes and heart problems, and her death is possibly linked to that. She was found dead in a guest house in Cape Town on Monday where she was shooting scenes for a local soap.

Surtie family spokesperson Alistair Izobell has since spoken to Channel24 and said that they are waiting for the autopsy results.

Alistair also said a funeral service for the actress would take place on Sunday, 13 June at Durbanville Memorial Park, Cape Town, at 14:30.

According to the Durbanville Memorial Park website, the chapel can accommodate only 36 people, adhering to strict COVID-19 protocols. The service will be broadcast via a live stream on various digital platforms. Further details to be released later this week.

“We have lost a household performer whose distinctive energy, artistic versatility and humility touched generations of South Africans for more than three decade,” the Presidency said. “On stage and screen Shaleen Surtie-Richards held a mirror to our unjust past and gave us hope for our future as a nation. May her soul rest in peace”