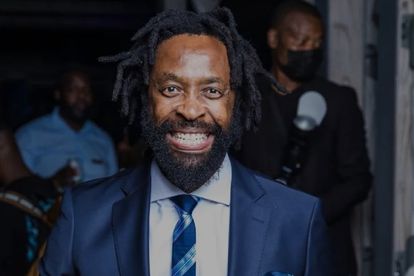 DJ Sbu’s threat to file a lawsuit against a troll who posed the question whether the DJ appeared in an explicit video, has been laughed off by tweeps. Image via @djsbulive/Instagram

DJ Sbu’s threat to file a lawsuit against a troll who posed the question whether the DJ appeared in an explicit video, has been laughed off by tweeps. Image via @djsbulive/Instagram

Tweeps think music artist and entrepreneur DJ Sbu is overreacting after his “emotional” response to a troll who tried to defame his name on Twitter. The troll posted a pornographic clip and alleged the Massiv Metro co-founder features in it.

‘I’LL FILE A LAWSUIT AGAINST YOU’

The user, whose Twitter handle is @tey_zen1th, shared a clip of a sex tape and asked if the guy in the video is DJ Sbu.

The former TS Records executive did not take kindly to the question and threatened to file a lawsuit against the troll.

“That’s not me. I’ll file a lawsuit against you for this.”

Although he later deleted the tweet, Tweeps were quick with the screengrabs.

ALSO READ: ‘The future is here’: DJ Sbu to launch his album on the metaverse

DJ Sbu’s threat did not land well with a number of people on Twitter. Many of them laughed at his reaction to the tweet, claiming he does not have a case because the tweep simply asked a question. Others felt that he should have ignored the troll and kept it moving.

“As a law student, I can tell you now that your case will not hold in court. Neither am I condoning her tweet though,” one tweep replied

“Dj Sbu shouldn’t have replied to that cos now tweeps will give that video more attention. It’s like telling your friends u don’t like a certain nickname. That’s the nickname for you forever,” another tweep said.

While some may find the video funny, Gomora actor Zolisa Xaluva is also not impressed. The actor who plays Malusi on the Mzansi Magic telenovela, took to his Twitter account to alert his fans that the man in the viral video is not DJ Sbu.

He also warned those posting the video and showed his support to the musician.

“The so called sex tape of @djsbu doing it’s rounds on social media is Not of @djsbu (False, Fake) Those posting or sharing this video face legal prosecution and or being banned from Twitter. #StayStrong“