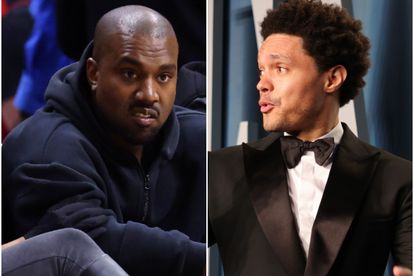 Kanye West has reportedly been in talks to be reinvited to the Grammys on Sunday after his performance was pulled last month over a racial slur at host Trevor Noah.

The rapper – who has kept a low profile in recent weeks – was reportedly banned from appearing at music’s biggest awards ceremony after the controversy. This, after he took a low-blow insult at the SA comedian, who chastised him for his behaviour towards estranged wife Kim Kardashian.

Kanye and Kim have been embroiled in a highly publicized divorce in recent months. Whilst both have reportedly moved on, Kanye has made threats of violence towards Kim’s new boyfriend Pete Davidson.

The duo have also publicly bickered over their polar parenting styles to their four children: North, Saint, Chicago and Psalm.

COULD KANYE PERFORM AT GRAMMYS AGAIN?

According to HitsDailyDouble, Kanye is one of a number of big name artists that are “in talks” to be announced as a last minute performance at Sunday night’s Grammys.

But if Kanye is to make the cut, the move will likely be met with controversy.

In March, Kanye was widely criticized for calling Trevor Noah a “koon” – a racial slur with a deep-rooted history. This, after the Grammys host accused the star of “harassing” his estranged partner.

Kanye was banned by Instagram over his actions and has since been radio silent on the platform.

But is there a storm brewing?

A SLAP FOR TREVOR NOAH?

According to many tweeps, Kanye West may very well take inspiration from Will Smith who slapped Oscars host Chris Rock last week.

Will claimed the act of violence was “out of love” after the host insulted his wife Jada Pinkett Smith over her bald head. Jada suffers from the auto-immune disease alopecia which leads to hair loss.

Many tweeps claim that Kanye could be up to something….

It’s unclear at this stage if the Grammys will ramp up security for host Trevor Noah or even Pete Davidson – should he be invited.