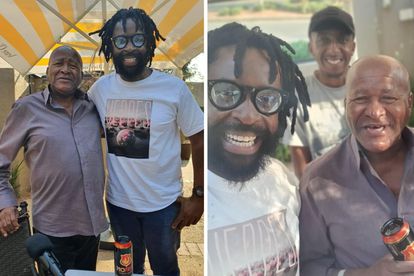 DJ Sbu has been accused of promoting his energy drink Mofaya during a meeting with Vusi Thanda.
Image via Twitter
@chrisexcel102

DJ Sbu has been accused of promoting his energy drink Mofaya during a meeting with Vusi Thanda.
Image via Twitter
@chrisexcel102

Not for the first time, DJ Sbu has courted controversy over tweeps accused him of having a hidden agenda when it comes to performing good deeds. And this time, “broke” veteran TV star Vusi Thanda is on the receiving end.

The musician-turned-businessman was seen visiting the actor, who recently went viral after he appealed to the public for cash donations.

Last week, the Emzini Wezinsizwa released a video of him sharing his bank account details, after revealing he was in a dire financial crisis. A number of celebs – like Pearl Thusi and SK Khoza – have vowed to help out.

But when it comes to DJ Sbu, tweeps are expressing their doubt – is he genuinely trying to help? Or was he “using” Vusi Thanda to promote his own brand?

In a pic posted by Twitter personality Chris Excel, DJ Sbu is seen posing in public in a picture alongside a beaming Vusi Thanda.

In another, Vusi holds a pair of sneakers, seemingly a gift from the businessman,

However, both pics feature a strategic placement of DJ Sbu’s energy drink Mofaya, leading many tweeps to believe that the meeting was nothing more than a “photo op”.

Here’s what tweeps thought of the celebrity encounter:

@KweziQuesta: “Can’t people just help just for the sake of helping? I hate when people use people’s misfortunes as a stepping stone to advertise their businesses”

@LessonBronze: “Visiting him in the time of needy to score publicity. He failed to do such when Zahara was on social needing help”

@dr_tumie: “The way DJ Sbu is stingy probably. H gave him an energy drink and left”

But despite the criticism, Vusi Thanda is seemingly laughing all the way to the bank after revealing that the public donated a whopping R100 000 to him, reported Sunday World.