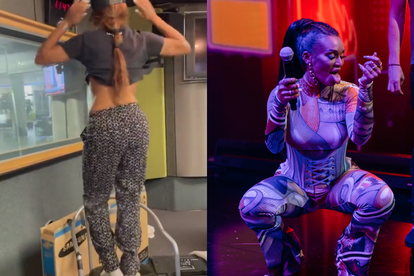 Just a short while ago, the Umlando dance challenge took South Africa by storm and saw many people on social media partaking in the fun. Soon enough celebrities also started doing the challenge and reality TV star and radio personality Dineo Ranaka was one of them.

She then got suspended for dancing on furniture which resulted in Pearl Thusi offering support. Mzansi was left far from impressed at this.

Unfortunately for Dineo, doing the challenge at her workplace – Metro FM – was not a good idea and soon she was suspended for dancing on office furniture. As they do, celebs such as Pearl Thusi started showing their support for Dineo.

“One of the best things I ever did for my self-esteem and growth was to leave Metro FM. It’s one of the decisions I’m proudest of. I hope Dineo is ok,” wrote Pearl.

South Africans however were not impressed by Pearl’s decision to support Dineo and quickly started slamming her for defending what they believe was unprofessional behaviour in the workplace.

Judging by their tweets, many of them agreed with Metro FM for suspending Dineo for dancing on the furniture at work.

Some of their comments:

“You were there under different management, right? Can’t be dancing on top of millions worth broadcasting desk and call that self-esteem or expression. I may understand Metro FM has issues but that is a workplace. Even in construction, playing like that is an offense.”

“So Pearl are you justifying her actions? If it was her tables would understand but those things were not hers. PEOPLE SHOULD LEARN TO RESPECT THINGS THAT DONT BELONG TO THEM. She was overpowered by her ego and too must pride, thinking she was untouchable.”

Meanwhile, Thando Thabethe has also shown Dineo some support by bizarrely doing the dance challenge at her office place too. In various clips, Thando can be seen dancing on chairs and table while at the 94.7 studios.

Many people are particularly shocked by Thando because unlike Dineo, she kept her shoes on while doing the Umlando dance.