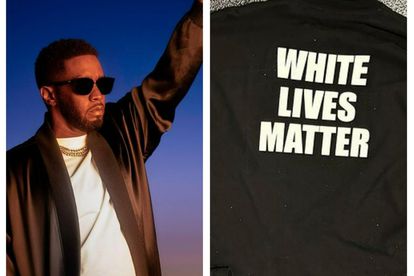 Diddy has come out in defence of Kanye West after wearing a “White Lives Matter” t-shirt at his Yeezy Season 9 fashion show in Paris on 3 October.

Diddy said Kanye is a super free thinker and a lot of time what he means gets misconstrued.

“I’m not making excuses I’m just saying that if he did it like that, that’s the way he thinks. I understand that White lives do matter but it’s not that. That was our slogan. That wasn’t our slogan to go share with nobody else.

KANYE RESPONDS TO GIGI HADID AFTER SHE CALLS HIM A BULLY

Model Gigi Hadid called Ye a bully after he came for the editor of Vogue Gabriella Karefa-Johnson after she shared her honest option on his controversial “White Lives Matter” t-shirt.

“You wish u had a percentage of her intellect. You have no idea haha… If there’s actually a point to any of your shit she might be the only person that could save u…As if the ‘honor’ of being invited to your show should keep someone from giving their opinion? Lol. You’re a bully and a joke,” Gigi said under Kanye’s Instagram post.

Kanye then went on a rant responding to Gigi. He said he wonders what Gigi and Venus’ perspectives were when he didn’t know where his child was on her birthday.

“GABBY TOLD ME THAT SHE DISAGREED WITH THAT (AND THATS ME PUTTING IT IN A NICE WAY) SHE SAID IT WAS ON HER GROUP CHATS. SO WHY DID EVERYONE FEEL SO FREE TO ATTACK ME ABOUT MY T SHIRT BUT

Kanye said that Candace Owens was the only public figure to publicly state that it was wrong or the Kardashians to tear a black man down and this was because he had a different political opinion.

Kanye also called out everyone that is outraged by his t-shirt and asked them where they were when he couldn’t see his kids even after he went public to get support but he did not.

ALSO READ: ‘Get your girl before I get mad’: Kanye slams Biebers, John Legend