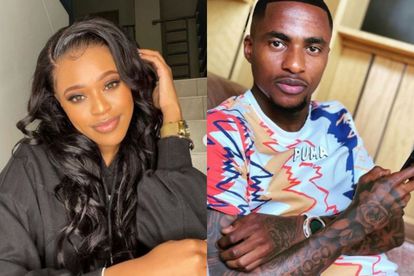 Is there trouble in paradise between The Queen actress Natasha Thahane and Orlando Pirates player Thembinkosi Lorch?

That is the question on everyone’s mind after the actress and the soccer player removed each other’s pictures on their Instagram accounts.

The actress and her soccer player boyfriend confirmed they’re dating when she recently (22 July) send him well-wishes on his birthday on Instagram.

May God continue to protect and guide you all the days of your life.

Wishing you many more years of happiness, love, peace, and full access to heaven’s resources.

I admire and respect who you are.

Twitter detectives think that Lorch cheated on Thahane and that she has broken up with him.

Their relationship began a few weeks ago (28 June) when Thahane posted pictures of herself in Zanzibar and appeared to be on holiday.

Tweeps joined the dots when Lorch seemed to be at the same resort as Thahane when they zoomed in on her sunglasses and saw him taking the picture.

DID SHE AFFECT HIS GAME?

The pair also trended a few days ago (1 August) when she was blamed for Lorch’s disappointing performance at the Carling Black Label Cup.

Orlando Pirates fans were reeling after the team lost to all-time rivals Kaizer Chiefs by one point and blamed Thahane for the loss.

Thahane hit back on the accusations by posting a TikTok video on her Instagram.

In the video the actress is seen re-enacting a classroom scene where she’s an educator disappointed by the performance of her learners.

Thahane is a huge Orlando Pirates fan who’s been tweeting about the team for ages.

The Orlando Pirates midfielder was arrested by police in September 2020 for allegedly beating up his then-girlfriend Nokhupiwa Mathithibala.

Sunday World reported that the soccer player’s then-girlfriend Nokhupiwa Mathithibala opened up a case of assault against him at the Midrand Police station.

Mathithibala told police that the soccer player strangled her after she’d enquired about his whereabouts.

The publication reported that things got heated when she asked him where he’d been after he disappeared for six hours.