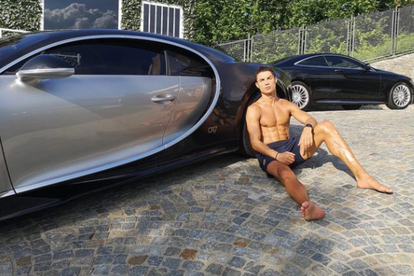 One of Cristiano Ronaldo’s employees reportedly crashed his car. Image via Instagram: @cristiano

One of Cristiano Ronaldo’s employees reportedly crashed his car. Image via Instagram: @cristiano

There is a lot of mystery around a car crash that reportedly left soccer legend, Cristiano Ronaldo, with a damaged Bugatti Veyron. According to various reports, the car was driven into a wall on Monday morning this week by one of his employees who is currently with Ronaldo and his family as they vacation in Majorca.

The identity of the employee has not been revealed but Ronaldo and his family are currently being protected by his ex-special forces twin brother bodyguards.

37-year-old Cristiano Ronaldo and his family are enjoying some fun in the sun at his Majorcan holiday home. Unfortunately, the little vacation hit a bump in the road after one of his employees crashed his multi-million-rand Bugatti.

According to the Daily Mail, Ronaldo and his family were in another vehicle in a small convoy when his employee came off the road and smashed into a stone wall.

The employee in question, who is suspected to be one of the star’s bodyguards, Sergio and Jorge Ramalheiro, then left the scene leaving other employees to deal with the police who later showed up to investigate the accident.

The employees were also tasked with stopping curious onlookers from taking photos of the damaged luxury car which was towed away from the scene covered in a blue tarpaulin.

No one but the car is harmed

It is unclear where Ronaldo was headed, but various photos show him and his family enjoying their vacation and even spending some time on his £5.5million Azimut Grande superyacht.

“The car smashed into a wall but there was only material damage with no one injured and the driver accepted full responsibility for what happened.

“The information about who was behind the wheel and what occurred is registered on a police database and is there for a court or officers to access if any further investigations need to be conducted,” a source told The Daily Mail.