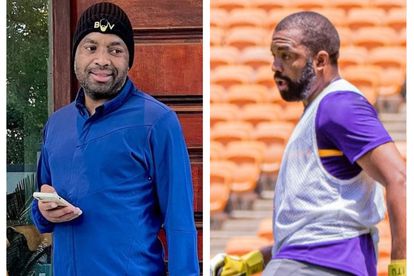 Tweeps have poked fun at Itumeleng Khune who turned 35 this week.
Image via Twitter
@IIKhune3216

Tweeps have poked fun at Itumeleng Khune who turned 35 this week.
Image via Twitter
@IIKhune3216

While Itumeleng Khune celebrated his birthday, trolls took to the social media platform Twitter to mock not only his age, but his appearance.

ITUMELENG KHUNE CELEBRATES HIS BIRTHDAY WITH WIFE AND KIDS

A week after celebrating their traditional wedding, Itumeleng Khune spent his 35th birthday with his wife, Sphelele, and their two daughters, Lesedi and Amo.

Sharing a picture from their special day, Sphelele shared on Instagram:

“Words are not enough to express how special you are to us (me and our little bears). Thank you for being the best lover/ mpintshi [friend]. Thank you for your warm heart. Know that we’ll always love and appreciate you”.

But it wasn’t all fun and games for Itumeleng Khune, who is currently out of the soccer season due to an injury.

He tweeted: “It’s going to be the best day ever but I’ll be training to get myself fit for the upcoming season”.

@Tamlynvanwyk1: “Alcohol is not good for people. Just sip some wine here and there late at night before bed. Otherwise, you’ll end up with a permanent AA face when the sun is out.

@locate_the: “This guy looks older than my 55-year-old uncle”

ALSO READ: Itumeleng Khune ‘can play for another 10 years’

Actually it’s 35 when he playing soccer and 53 when he is in the real world pic.twitter.com/UrGatvU8iY

Itumeleng Khune has previously poked fun at his own appearance, including a picture of him sporting a grey beard.

Responding to one tweep who said he looked “34 years old soccer age and 47 years old real age”, Itumeleng Khune replied: “Since you know me well, yes, and add another 50 on top”.

Itumeleng Khune also expressed his annoyance at the commentary surrounding his age and appearance. He tweeted in January 2021:  “People age differently, what is so hard to understand?”