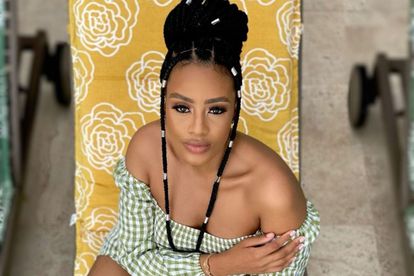 Cassper Nyovest sets the standard by sending a R3k E-wallet to his baby momma Thobeka Majozi. Image via Instagram
@bexxdoesitbetter

Cassper Nyovest sets the standard by sending a R3k E-wallet to his baby momma Thobeka Majozi. Image via Instagram
@bexxdoesitbetter

The social media influencer – who shares baby son Khotso with the rapper – posted a thirst trap picture on Instagram that had everyone drooling – including Cass!

The hot mama showed off her enviable curves as she posed in a peach mini dress, with the cheeky caption: “Buzani mina, imama yenza nje” (Ask me, my mother just did).

Thobeka was likely marking her territory after fans commented on Cassper’s chemistry with former Miss Universe Zozibini Tunzi, who made an appearance on the show’s debut episode this week.

The pair had viewers enthralled with their obvious flirting and even trended on social media. And it’s no secret that Cassper has long been an admirer of Zozi, he’s posted many a tweet praising the Eastern Cape’s beauty and brains.

But there’s just one problem – where does Thobeka fit into the picture?

The KZN social media star has not directly responded to the TV fiasco – but she did send an indirect message to the public. She reposted a quote on her Instagram Stories that read: “The older I get, the less I feel the need to be included, understood or accepted” .

CASSPER SENDS HIMSELF A SHOUTOUT

Meanwhile, following the success of the premiere of The Braai Show With Cass, the star took to his own Instagram account to give himself a public pep talk.

Following a lengthy battle with his nemesis AKA over the right to present the SABC 1 show, Cassper posted a picture of himself with the caption: “Just wanna give this guy a shout out. You’ve been through so much my dude! You keep fighting for yourself! Just want you to hang in there! This is only the beginning!

“I know your heart is in the right place and I just wanna let you know that nothing goes unnoticed! I love you dude!! Keep going! The Don Billiato!”.