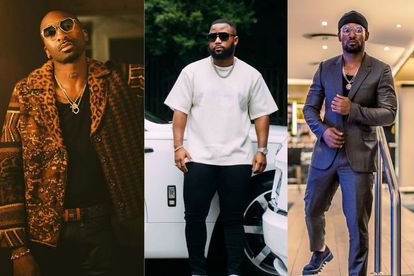 Rapper Refiloe Maele Phoolo, popularly known by his stage name Cassper Nyovest, opened up about his beef with both DJ Prince Kaybee and rapper Riky Rick in an interview on the Banques and Venom show on 10 August.

Aside from Cassper Nyovest’s most notorious beef with rapper AKA, the Mama I Made It hitmaker also has a few issues with other big names in the entertainment industry including DJ Prince Kaybee and Riky Rick.

This follows Prince Kaybee taking a swipe at Cassper in July when he said celebrities gift their celebrity friends samples of their products instead of people who could bring value to their product after Cassper Nyovest posted a picture of giving influencer Mihali Ndamase a pair of his sneakers. Cassper then called out Kaybee on Twitter and a boxing match was mentioned. Kaybee was first offered R350 000 for the match, which he denied and demanded R2.5 million.

The Indoda hitmaker explained that Prince Kaybee does not actually want to fight but was looking for a money making opportunity.

A similar occurrence happened between Cassper and AKA who often fought on Twitter and a boxing match went back and forth for quite some time before Cassper cancelled the boxing match saying its “boring now”. However, the AKA and Cassper beef seems to still be brewing as Cassper took over as host of The Braai Show on SABC 1 which was previously hosted by AKA.

CASSPER ON BEEF WITH RIKY RICK

Cassper Nyovest revealed that he believes the real reason behind their beef is their ego and admitted that he generally does not want to talk to him. Although there is no confirmed reason for the beef between the rappers, Cassper Nyovest rapped about Riky Rick on his song To Whom It May Concern where he speaks about a friend trashing his name. This did not sit right with Riky Rick and the beef has not yet been squashed.

“You could be angry and whatever, but I genuinely don’t want to talk to him. I don’t want to solve it. Right now it’s where I am. I don’t think that it’s damaged forever. You know maybe one day I’ll be at Milton college and Mikey will be taking a certificate there and Khotso is there and I happen to be sitting next to RIKY,” he continued.

“Maybe one day we’ll connect on a different level. Not as artists but as parents. And maybe that’ll happen. But as Mauthi fela I think it was destroyed for like nothing,” he added.