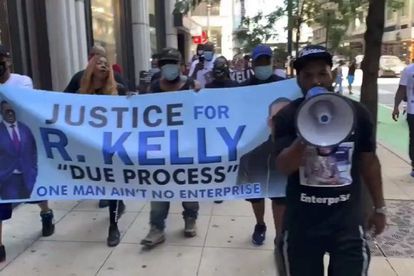 Fans rallying behind R Kelly to be freed outside court. Photo: TEXVOL18/ Twitter.

Fans rallying behind R Kelly to be freed outside court. Photo: TEXVOL18/ Twitter.

Following the sentencing of disgraced R&B American singer R Kelly, a movement to free him has mushroomed online.

The singer, whose real name is Robert Sylvester Kelly, was sentenced to 30 years behind bars following his conviction over sex crimes.

The 55-year-old was convicted last September in New York of racketeering and sex trafficking crimes. Ahead of his sentencing, a handful of women took the stand to confront Kelly, BBC reported.

According to the report, one of the victims, Angela, stood in court, looked directly at Kelly and called him a ‘Pied Piper’ who ‘lured children with his money and celebrity.’

While R Kelly’s sentence has been widely welcomed, some of his fans have opted to campaign against his lengthy incarceration under the banner #FreeRKelly both on the internet and on the ground.

“30 years with no evidence, imagine that. #FreeRKelly,” is one of the countless tweets that have flooded Twitter under #FreeRKelly since the handing down of the sentence on Wednesday.

What do you think of the sentence?

Is it appropriate or too harsh against R Kelly?