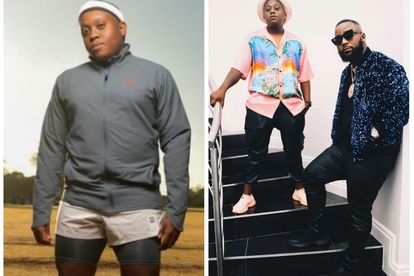 Carpo – the best friend of Cassper Nyovest – has opened up about his depression and suicide attempts.
Image via Instagram
@casspernyovest

Carpo – the best friend of Cassper Nyovest – has opened up about his depression and suicide attempts.
Image via Instagram
@casspernyovest

You may see him as the funny side-kick to Cassper Nyovest, but for Solomon Carpo More, that’s just his tough exterior

That’s because the comedian, popularly known as the rapper’s best friend has secretly struggled with depression for many years. He’s also attempted suicide at least five times.

Over the weekend, Carpo completed a 21-kilometre race for mental health awareness. And the motivation for Cassper’s bestie of 20 years was his own experience

Speaking to Tshisalive, he said: “This is something big and close to my heart. I’ve been through so much, losing my mom and dad, and I want to share my story with people. I cried a lot before the race because June is the month I lost my dad”.

Carpo also reflected on his own suicide attempts, which he reveals stemmed from the pain of losing both of his parents.

He continued: “I know how it feels to want to kill yourself, I tried it five times after my parents passed away. I tried hanging myself, cutting myself, I did all those things.

“I went to the hospital, I was bleeding badly and Cassper paid R103 000 cash. The doctor said no one could survive what I survived”.

After being treated, Cassper Nyovest advised his friend to seek help to deal with his mental health issues. Carpo added: “When I stayed with him I felt he was someone who cared about me. He was like my friend, father, and brother, he advised that I seek help. He paid for my therapy so I can calm down”.

CELEBS WHO STRUGGLE WITH DEPRESSION

Meanwhile, celebs like Gigi Lamayne, Mlindo The Vocalist, and Samthing Soweto have all recently spoken about their struggles with depression.

Gigi – who attempted suicide in 2019 – recently tweeted: “That’s the thing with depression. When you’re low, you’re super low. All it takes is a trigger. Pain, rejection, loss… then you’re in it and getting out is a struggle”.

Last week Mlindo revealed that he was working on new music after going through a tough battle with depression. Samthing Soweto, meanwhile, confessed in a tweet that he could not see his own worth due to the mental illness.

ALSO READ: ‘We need the big festivals back’: Cassper is ready for mask-free events