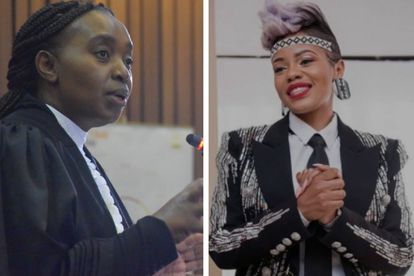 Twitter users no longer have faith in Advocate Zandile Mshololo after Zandie Khumalo posted her on IG. Image via Twitter @billie076, @zandie_khumalo_gumede/Instagram

Twitter users no longer have faith in Advocate Zandile Mshololo after Zandie Khumalo posted her on IG. Image via Twitter @billie076, @zandie_khumalo_gumede/Instagram

Twitter users have voiced their opinions following an Instagram post by singer and Kelly Khumalo’s sister, Zandie Khumalo in which she sings the praises of defence attorney Advocate Zandile Mshololo.

With the Meyiwa trial still underway at the Pretoria High Court, tweeps are starting to suspect Mshololo has been bribed and believe she is no longer on Advocate Malesela Teffo’s side, who is also a defence attorney.

On Monday 13 June, the National Director of Public Prosecutions (NDPP) made the call that the second docket in the Meyiwa trial be rendered inconsequential as it lacks merit.

Meyiwa was shot on 26 October 2014 at the family home of his lover Kelly Khumalo, in Vosloorus, Gauteng.

After the announcement that the second docket lacks merit, Zandie took to her Instagram on the same day to post a picture of Mshololo clad in IsiZulu traditional regalia.

Her caption read: “The Zulu nation. Oh Lord my namesake is so beautiful she looks like she’s about to sing Ikhwela.”

Ikhwela is Zandie’s latsst and controversial song that caused a frenzy on social media a few weeks ago when she posted some of the lyrics from it.

TWEEPS ARE NOT HAPPY WITH MSHOLOLO

Zandie Khumalo’s mention of the advocate does not sit well with tweeps.

Although it isn’t clear if the Ngiyak’thanda singer was throwing shade or really singing Mshololo’s praises, some Twitter users now believe that the advocate is not as loyal to the case as they believed she is. Others think that she may have been bribed by the Khumalos or that Zandie is simply playing PR amid the attention she is receiving during the trial.