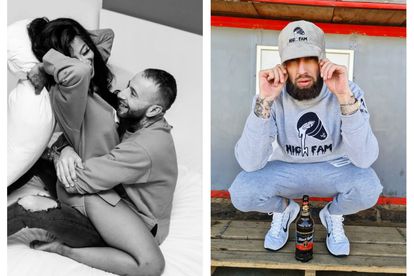 Tweeps have trolled Chad da Don on his rap career after he split from Kelly Khumalo in 2019.
Image via Instagram
@kellykhumaloza/@chad_da_don_official

Tweeps have trolled Chad da Don on his rap career after he split from Kelly Khumalo in 2019.
Image via Instagram
@kellykhumaloza/@chad_da_don_official

Kelly Khumalo and her relationships with slain soccer star Senzo Meyiwa and Jub Jub are often talking points on social media…but it seems many have forgotten about her ex-boyfriend Chad da Don.

The rapper – who was once engaged to the controversial singer – has disappeared from the spotlight, albeit not from his own doing.

What started out as a saucy feature by Chad da Don in Kelly Khumalo’s Dance Comigo music video in October 2018 turned into rumours that the pair were dating in real life.

Fast forward just two months later and the pair announced their engagement. They celebrated the occasion by tattooing each other’s initials on their ring finger as a sign of their commitment to each other.

The high-profile celebrity couple attended red carpet events together, were regulars on each other social media and Chad specifically took an interest in playing the father figure role to Kelly Khumalo’s two kids: Christian and Thingo.

But things unravelled quickly. In February 2019, Chad confirmed to Drum magazine that they had split. Shortly thereafter the couple was back on with Chad and Kelly Khumalo revealing their engagement rings on social media in April.

The couple split again sometime later, and this time for good. In November Chad went public with his new romance with Carlla Poggenpoel.

She continued: “I had to downplay who I am to just fit into that world of just wanting to have a family. I am not that desperate”.

WHERE IS CHAD DA DON?

With news of the Senzo Meyiwa trial, tweeps have dug up her relationship with Chad da Don. And many have claimed that the rapper has lost his relevance following his split from the singer.

@MjekeUTD: “Chad da Don has been really quiet since he hooked up with Kelly Khumalo. Someone check on him”

@ManRazo0: “The last time we had from Chad da Don was before dating Kelly”

@niknaks16: “Before dating Kelly Khumalo I didn’t know who he was and I still don’t know what he does”

According to his Instagram account, Chad da Don has continued to release new music. He is also still dating his model girlfriend.