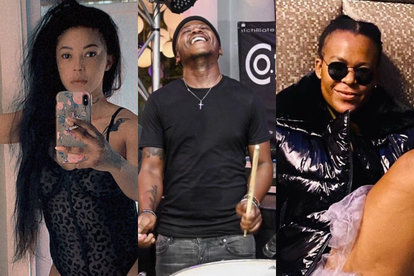 If the rumours are true then Zodwa Wabantu’s side dish Thabo “Smol” from local band Black Motion is a very busy man. South African social media users have been using their excellent investigating skills and have seemingly put two and two together.

According to peeps, Thabo is no longer satisfying Zodwa’s needs and has now moved on with Mzansi singer, Kelly Khumalo.

Sorry Zodwa, Thabo may have moved on…

Remember when everyone couldn’t stop talking about how Zodwa Wabantu exposed her intimate relationship with Thabo aka “Smol” from Black Motion? The queen of sexy dancing spilled all the tea and juicy details about their intimate affair and left Thabo with no choice but to confess to partaking in what Zodwa has to offer.

A little while later Zodwa headed to IG to beg Thabo to come back while promising that she will never air their business publicly again. Unfortunately for her, the musician seemingly isn’t one to linger on flings and is rumoured to have found love in another South African celebrity’s arms – songbird Kelly Khumalo.

If you don’t know this, South Africa has the best celebrity social media detectives and can quickly find what the rich and famous are trying to hide. An eagle-eyed social media user put two and two together after noticing that both Kelly Khumalo and Thabo were in Bloemfontein, Free State at the same time.

Soon thereafter Kelly shared a snap of herself wearing some spunky polka dot yellow socks. She captioned the snap:

“I stole these socks, the owner can call me.”

It didn’t take long for the Twitter user with the handle, @TeffuJoy to find a snap with Thabo wearing the exact same jolly yellow socks.

SA gets to talking

Of course, it didn’t take long for people to be convinced that the two musicians were indeed getting close on the down-low. Many of them headed to the comment section to share their thoughts of what may be Mzansi’s latest celeb hook-up. Read some of their thoughts below: