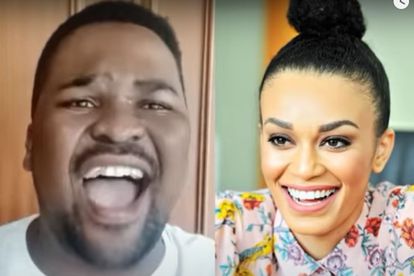 Slik Talk has returned with another scathing YouTube video – and this time the celebrity commentator is taking aim at Pearl Thusi.

The controversial YouTuber has fired shots at the actress and presenter who trended this week after her meeting with rapper Big Zulu.

SLIK TALK: ‘YOU HAVE NO TALENT’

Diving straight into it, Slik Talk brought up the video of Pearl Thusi meeting Big Zulu, in which tweeps claimed was a shady swipe at nemesis Bonang Matheba.

He said: “I just saw this disturbing video of Pearl Thusi running up on Big Zulu to give him an inappropriate hug.

“Pearl Thusi: first of all you’re pushing forty, but you act like you’re nineteen. Baby girl, you’re not as desirable as you once was. You’re constantly trying to get attention and trend”.

ALSO READ: Pearl Thusi claps back after Bonang fans accuse her of ‘attention-seeking’

He continued: “Let’s focus on the talent, which you don’t have. You are a terrible actress, you cant act to save your life. Queen Sono was one of the worst shows I’ve seen in my life….Fistful of Vengeance was garbage

“You keep getting opportunities even though you have zero talent to your name. Your biggest claim to fame was twerking on Live AMP“.

And then a low-blow by comparing Pearl to her industry rival Bonang.

Slik Talk said: “The one thing I give Bonang and Minnie [Dlamini] is that they always know how to carry themselves like ladies and they’re not constantly trying to get attention.

“When is the clout chasing going to stop? In my opinion you’re overhyped and you’re overrated”.

PEARL THUSI CLAPS BACK AT YOUTUBER