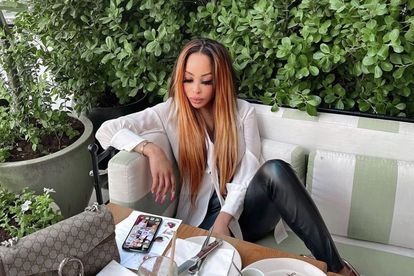 South African actress Khanyi Mbau opened up about being labelled a “gold digger” on the first episode of Netflix’s reality show Young, Famous & African, which premiered on 18 March.

KHANYI MBAU: ‘I THOUGHT I’D BE A SUGAR BABY, NOW I’M A COUGAR’

Khanyi Mbau is spicy and transparent on the first season of Young, Famous & African. She opened up about why she had been labelled a gold digger – because of her “baby daddy” Mandla Mthembu.

“I’m Khanyi Mbau, gold digger is what my trolls call me,” she says.

“Being a gold digger… I earned the name when I had a baby with my baby daddy.. And people said it can’t be love. She’s definitely there for his money, she is a gold digger,” she continued.

She also dived into her relationship with alleged fugitive, businessman boyfriend Kudzai Mushonga. She revealed that they enjoy waking up to the piano notes in the morning.

The Happiness Ever After star also said she always thought she would be a “sugar baby” but now she is a cougar because Kudzai is seven years younger than she is. She also hinted about how much she loves men who pay for things.

“I thought I’d be a sugar baby now I’m a cougar. I’m dating a 28-year-old and I’m 35. Men are like the police, they protect and serve. Protect me from taking out my card and paying for my sneakers. Serve me by bringing that paper bag to me. Protect and serve,” she added.

IS THE ACTRESS A ‘GOLD DIGGER’?

“The thing is with my relationships I treat them like how I buy a car or a house … you know what you want in the house. I know what my requirements are and I’m not going to back down,” she said during an interview on KayaFM’s Afternoon Drive show with Sizwe Dhlomo.

“So many people confuse relationships and say, ‘Ah, I’m looking for love’ and two months down the relationship they’re looking for something else and that’s why they’ll never win because you haven’t made it clear what you want,” she continued.