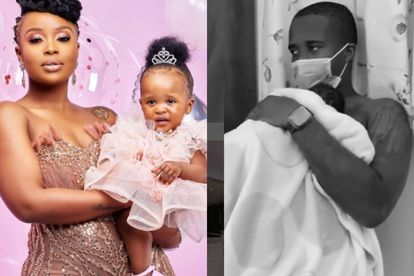 South African influencer Sithelo Shozi has revealed the face of her baby with Andile Mpisane’s for the first time on her first birthday today (21 July).

Sithelo Shozi and Andile Mpisane have two children together. Many were concerned over why Andile and his mom Shauwn “MaMkhize” Mkhize never showed baby Likuwe Coco Mpisane’s face. However, MaMkhize previously revealed that it was because Sithelo preferred to only show her children’s faces after they turn a year old.

So, Sithelo officially shared the first look off her baby on Instagram today. Take a look…

“My baby. I am very grateful, I am eternally thankful to the creator for you, I am the luckiest person, I wish you prosperity. My hope is in you,” she wrote when roughly translated to English.

Sithelo and Andile have been making headlines for the wrong reasons lately. The influencer accused Andile of physically and verbally abusing her earlier this month.

“Let’s start with when I was beaten into a pulp and had a miscarriage at the hands of my so called ‘victim’ in a room full of his family and friends, rushed to the nearest hospital and treated like nothing ever happened,” she wrote.

“You all mocked me and made a ridicule out of when I was left with a 3 month old child but little did you know that was my break free from an endless pain. That was God saving me from eventually taking my own life. Nothing has been more liberating. I saw God’s hand in my most vulnerable place,” she wrote.

According to Sunday World, Andile then demanded a paternity test on both his daughters with the influencer.