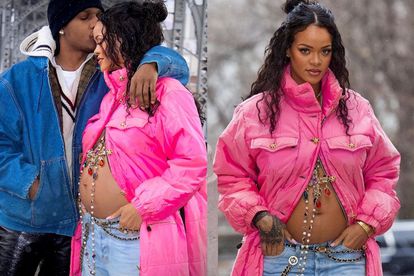 In December 2021, Rihanna denied rumours that she was expecting a child after a Barbados appearance the previous month. Almost two months later, the singer and businesswoman has confirmed her pregnancy in a photoshoot with celebrity photographer Miles Diggs. The photoshoot took place in a freezing Harlem, New York, with the singer’s partner, A$AP Rocky.

Rihanna and her partner A$AP Rocky were photographed on Friday 28 January in an exclusive photoshoot with celebrity photographer Miles Diggs aka Diggzy. The pair were rumoured to be dating several years ago, but were seen with other people between 2013 and 2020. Rocky confirmed their relationship in 2021.

In the photoshoot, Rihanna stunned in a $8 000 (R124 000) pink Chanel coat. The singer did not wear a shirt under her coat. Instead, she accessorized with a body chain draped over her visible baby bump.

In December, Rihanna denied the pregnancy rumours when a fan sent her an Instagram DM asking if the news was true.

“You ain’t came to the first 10 baby showers! Y’all breed me every year dammit lol,” she responded.

A$AP Rocky confirmed their relationship in an interview with GQ last year. He called the Grammy award-winning singer his “lady”.

“So much better when you got ‘the one’. She amounts to probably like, a million other ones.”

“When you know, you know,” said Rocky.

The pair attended the Met Gala together at the Metropolitan Museum of Art in New York in September 2021.

Congratulatory messages poured in after the couple’s images hit Twitter.

“Rihanna being pregnant is the best thing I’ve heard this entire month,” wrote another tweep.

“Rihanna is pregnant! But for real this time! Congrats to her and A$AP Rocky!”