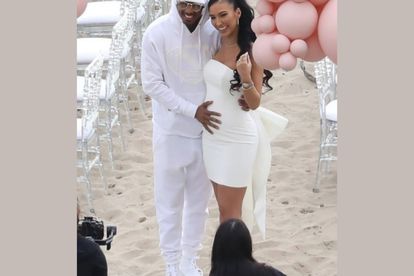 Nick Cannon confirms that he is expecting his eight child with Bre Tresi. Image via Twitter @urbannews__.

Nick Cannon confirms that he is expecting his eight child with Bre Tresi. Image via Twitter @urbannews__.

American television host Nick Cannon confirmed that he is expecting his eighth child with Bre Tiesi on an episode of his day time talk show on 31 January.

Nick Cannon was rumoured to be expecting his eighth child with NFL star Johnny Manziel’s ex, Bre Tiesi. The speculation comes after Cannon hosted a gender reveal party with Tiesi in Malibu, California.

The photos from the event show that it is a boy! Cannon and Teisi gathered with a few friends on what appears to be the beach. The pair were both dressed in white and Cannon is seeing cradling Teisi’s baby bump.

Now, the television host has confirmed that he is expecting his eighth child with Tiesi. He used a picture from the gender reveal party as his “picture of the day”.

“I want to share this beautiful extraordinary moment. It’s me and Bre, the next mother of our child. It’s a boy, we found out officially yesterday” he said.

Tiesi recently finalised her divorce from Manziel recently and held a “divorce party” in November 2021. Cannon on the other hand welcomed four children with three different women within a year. This would be his fifth baby within two years.

WHO ARE THE ‘BABY MAMAS’?

Cannon already has seven children. Who are the children and their moms?

Cannon said telling his children about his son’s death was pretty intense.

“Having to explain that to 10-year-olds [Moroccan and Monroe] and a four-year-old [Golden] is pretty intense. But their understanding and them being there for me probably helped me keep it together as well as really deal with it. Specifically, even, Roc and Roe. They were there for the entire journey,” he said.