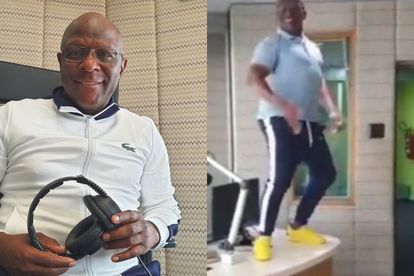 Putco Mafani is the second SABC employee to be suspended for participating in a dance challenge. Image via Facebook: Putco Mafani

Putco Mafani is the second SABC employee to be suspended for participating in a dance challenge. Image via Facebook: Putco Mafani

Radio presenter Putco Mafani has been suspended from Xhosa radio station Umhlobo Wenene for joining the viral #NkaoTempelaChallenge. A video of Mafani dancing to the amapiano hit surfaced on social media.

The South African Broadcasting Corporation (SABC) confirmed that Mafani had been “unscheduled” on Umhlobo Wenene. He is the second SABC employee to be suspended for dancing on office furniture following Dineo Ranaka’s suspension on Tuesday 18 January for doing the #UmlandoChallenge on office furniture.

In the viral video, Putco Mafani can be seen dancing to Mellow and Sleazy’s viral amapiano hit Nkao Tempela on the table of the radio studio at the SABC in Auckland Park, Johannesburg.

According to SowetanLIVE, Mafani has been suspended since the video went viral.

“The SABC can confirm that it is aware of the video and at this stage, Mr Putco Mafani has been unscheduled on Umhlobo Wenene FM,” said SABC’s group executive for corporate affairs and marketing Gugu Ntuli.

Taking to Facebook on Monday 24 January, Putco Mafani expressed that he was “sorry” for allowing himself to be “swept by the exciting wave of the Nkao Tempela dance at work”.

“My actions were those of excitement and overlooked a few important safety regulations, so I have been unscheduled till Thursday 28 January 2022, due to this.”

“Through this experience, I have been exposed to many aspects of my job and its responsibilities with I might have taken lightly before. I know I could have handled my excitement about that song differently.”

After news of Putco Mafani’s suspension hit social media, Twitter users weighed in with mixed reactions. One tweep claimed that the radio presenter used to dance during halftime at Soweto Derby.

“That man is shameless,” added the tweep.

“Stop dancing on your company’s furniture! Ama2000 have you risking your jobs and the bg while looking ridiculous,” wrote another tweep.