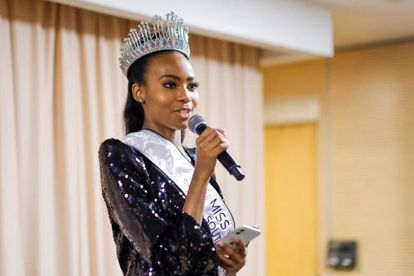 This, after the Twitter account for the presidency tweeted a picture of Cyril Ramaphosa meeting with an Israeli ambassador.

Last year, Lalela was put under pressure to withdraw from the Miss Universe pageant, which took place in Eilat, Israel in December.

Human rights and pro-Palestinian activists argued that the beauty queen was supporting an “apartheid state” by visiting Israel. Government also officially withdrew their support to Lalela, claiming the Miss SA organisation “disregarded advice” not to go ahead.

In a tweet posted on tuesday, 25 January, the office of the presidency posted about Cyril Ramaphosa meeting with the Israeli ambassador

The president received a letter of credence – a formal introduction for the mission-delegate to serve in diplomatic missions in South Africa – from Israeli ambassador Eliav Belotsercovsky.

According to the SABC, 13 foreign ambassadors, including Israel, have vowed to improve relations with South Africa during their stay in the country.

Eliav Belotsercovsky said of his new role: “There is so much we can do together in the field of science, technology, education and training. One example of such cooperation from both countries had worked during COVID-19. We have been working together using Israeli methods to empower young women on leadership and self-development.

“On food security, we have been using Israeli plans and technologies to create vegetable gardens in schools. An Israeli NGO and Vision Africa have already connected hundreds of South Africans from rural areas of Limpopo to running water using Israeli technologies and expertise.”

Following the credentials ceremony, Twitter was rocked by South African tweeps calling out the government for “hypocrisy”.

This, after the department of arts and culture last year distanced itself from Lalela and Miss SA after condemning “the atrocities committed by Israel against Palestinians”.

“Government, as the legitimate representative of the people of South Africa, cannot in good conscience associate itself with such,” the government said in a statement in November.

“Where are those ‘I Stand With Palestine’ Ramaphosa fools who were attacking Lalela Mswane?”

“So Lalela was eating alive for nothing. Where is the same energy for those who were calling her to be isolated?”

“The very same government who told Lalela not to go to Israel? Look at him, beaming with a smile, welcoming Israeli diplomats. Some of us did say they were just grandstanding, as always”

Tweeps insisted that Lalela – who went ahead with participating at the Miss Universe pageant, where she placed 3rd – deserved an official apology.

“If you know that you were one of the spawns of Satan who cussed, threatened and bullied Miss SA @Lalela_lali Stand up, admit and apologize. I agree as well that the government owes Miss SA a massive apology for disowning her and then doing this crap”

“We owe @Lalela_lali an apology. Those of you that stood by her we apologise to you also. @CyrilRamaphosa is a hypocrite”

“Didn’t @NathiMthethwaSA shun @Official_MissSA for participating in Miss Universe hosted in Israel? Where is that brigade now? Lalela deserves an apology!”

Others praised Lalela for remaining true to herself and her dreams.

“Lalela is the most courageous Miss SA of all”, said one tweep

ALSO READ: Lalela fights back tears: ‘You don’t have to wish death on me’

City of Cape Town load shedding schedule for Thursday: Not as bad as Eskom