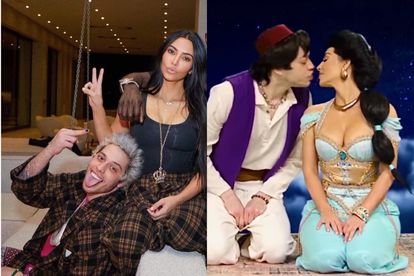 “Pete has told her he doesn’t want to see anyone else. She is telling some people they aren’t super serious but she isn’t seeing anyone else… She’s trying to not make a big deal about it but is super into him,” said a source to E! News.

Kim and Pete shared an intimate on-screen kiss on SNL in October. The pair sparked romance rumours when they were photographed holding hands on a rollercoaster. They have since been spotted out on a few dates.

Pete travelled to California for his birthday on Tuesday 16 November, which he reportedly spent at Kris Jenner’s Palms Springs mansion. The comedian shared snaps with Kim and Kris in matching pajamas. These were actually a pair of Skims that they were promoting.

There is a significant age difference between the pair, Kim is 41 and Pete is 28. However, her estranged husband Kanye West is also dating younger — he is reportedly dating a 22-year-old model named Vinetria.

ALSO READ: Who is Kanye’s 22-year-old girlfriend? Five things to know about Vinetria

Tweeps are divided over the news that the pair are officially dating. Many don’t seem to believe the romance is anything more than a “publicity stunt.”

“There is not one single thing in the entire world that could convince me that kim and pete’s relationship is not purely a publicity stunt,” wrote @radikellll.

“Do you think that Pete Davidson & Kim Kardashian are dating just so they can hang out with Kourtney Kardashian & Travis Barker and MGK & Megan Fox? You know, because MGK and Pete are besties while Kim and Kourtney are sisters,” wrote @DreamReaper18.

“Man if Kim is really dating Pete Davidson that relationship makes so much sense to me. After years with a narcissist let me tell ya…..she deserves it,” wrote @kaliadoraa.