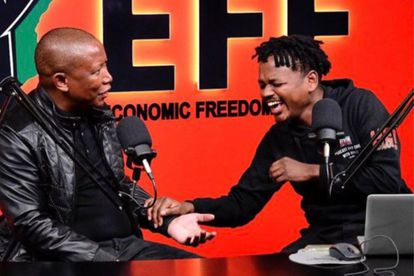 ‘They can’t assassinate me’: Julius Malema on ‘Podcast and Chill’. Image via Twitter @Truthte83602973

‘They can’t assassinate me’: Julius Malema on ‘Podcast and Chill’. Image via Twitter @Truthte83602973

EFF leader Julius Malema was the recent guest to be interviewed by MacG on Podcast and Chill where he discussed growing up in Limpopo, witchcraft, the ANC, Eskom, breaking his virginity, his family life, and more.

The popular politician Julius Malema also opened up about stepping down as EFF leader, not knowing his father, joining politics at 9 years, growing up in a big family, his mother’s epilepsy, and more on Podcast and Chill with MacG.

Malema also discusses recovering from bankruptcy and reveals why he can’t be assassinated.

“They can’t assassinate me, I have very powerful ancestors, they don’t play. I see trouble before it happens and I cause trouble. I take a decision that we cause trouble now“

“I joined politics for two things, we are either going to die or we are going to win.”

“For us to be here, is a miracle. I am not afraid of death. We knew how to carry firearms at the age of nine.”

When MacG asks then why do you have bodyguards, Malema responds:

“For order. Not being afraid of death should not be confused with suicide.”

“Have you ever shot someone?”

“I can’t answer that one, it’s very incriminating. The next question will be, who?”

The EFF leader also opens up about not knowing his father, his mother’s epilepsy, and growing up in a big family.

Malema adds that his mother never revealed his father’s identity when she passed away and that his grandmother refused to tell him who his father is when she also passed away.

‘PODCAST AND CHILL’: ’DO YOU BELIEVE IN WITCHCRAFT?’

The father of three, who’s from grew up in Seshego, Limpopo also reveals that he doesn’t believe in witchcraft when podcaster MacG asks him if he believes in witchcraft.

Malema also jokingly puts MacG in his place when compliments his wife as ‘beautiful’ and is cagey about when he broke his virginity.

The popular politician also reveals he’s got a 15-year-old son from his previous relationship who lives with his wife and his two sons from his marriage.

“I come from Limpopo and I never saw a witch besides conspiracy theories did you see one.”

“Well I believe people who believe in and glorify witchcraft are witches, especially if you are in your late 20s and beyond, and in most cases, it’s just hearsay.”