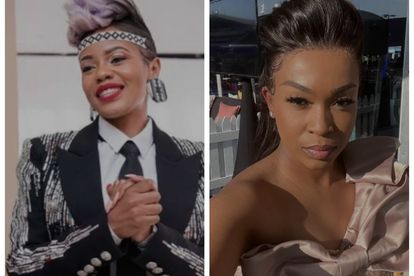 In her exclusive interview with eNCA, Zandie Khumalo (left) questioned why Mandisa Mkhize (right) has never been investigated for the murder of Senzo Meyiwa. Image via @zandie_khumalo_gumede, @mandisamkhize01/Instagram

In her exclusive interview with eNCA, Zandie Khumalo (left) questioned why Mandisa Mkhize (right) has never been investigated for the murder of Senzo Meyiwa. Image via @zandie_khumalo_gumede, @mandisamkhize01/Instagram

Afro-pop singer Zandie Khumalo-Gumede has questioned why Senzo Meyiwa’s wife, Mandisa Mkhize, has not been investigated for his murder in October 2014.

During her exclusive interview with Slindelo Masikane, which aired on Monday 18 July on eNCA, Zandie alleged that the late Orlando Pirates and Bafana Bafana goalkeeper’s murder may have been a hit gone wrong and may have been ordered by Meyiwa’s mother and wife for Kelly Khumalo.

Before the interview aired on the DSTV channel, Zandie took to Instagram to share her perspective on the Senzo Meyiwa case.

In a post that was accompanied with a poster of her interview, she asked why hasn’t Mandisa been named a suspect.

“For the very first time in this country kushona umyeni ushonela [a husband dies] at a girlfriends house yet the wife has never even once been considered a suspect, wake wayizwaphi leyonto [where has such ever happened]??? whether she did it or not the investigation will determine but naye akaphenywe [she should also be investigated] !!!!!!!!!!!” Zandie wrote.

These are the same sentiments she echoed during the interview, adding that Meyiwa’s mother and family should also be suspects.

“No one has ever looked at Mandisa. No one! Why wasn’t Mandisa’s phone also taken? Why is Mandisa not investigated?” she questioned.

According to Zandie, the goalie’s mother hated her sister, Kelly, so much that she allegedly used umuthi to cast a spell called “isichitho” on the Empini singer to get her and her son to break up.

“To what length did she go to make sure this [relationship] does not happen? Is it even possible that she and her daughter-in-law [Mandisa] ordered a hit, not necessarily to target Senzo but to target Kelly?” Zandie asked.

In her interview, Zandie also revealed that on a few occasions, she and her ex-boyfriend Longwe Twala were called in by the police to “interrogate” them. The Ikhwela singer, who was present along with Longwe and four adults and two children on that fateful day when Meyiwa was shot in Vosloorus, says she co-operated each time.

Continuing to narrate some of the events after the star’s death, Zandie said she recalled being asked to give more than one statement. She says she’s also had to role-play and do a lie detector test with her mother, Ntombi Khumalo, and Kelly.