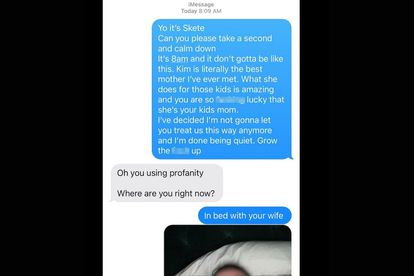 Alleged texts between American rapper Kanye West and American comedian Pete Davidson have been leaked on 14 March and the internet is entertained… to say the least.

Kim has been dodging Kanye’s multiple attempts to win her back. So, Pete has become the Gold Digger hitmaker’s target. It may have all started when the Keeping Up With The Kardashians star kissed Pete when she hosted SNL in October 2021 – but it became more intense in January when Kanye released Eazy.

“God saved me from that crash/ Just so I can beat Pete Davidson’s a**” rapped Kanye in Eazy.

The All of the Lights hitmaker cut rapper Kid Cudi out of his album. He implied that this was because he is friends with Pete. Kanye then gave Pete the nickname “Skete” and used this in several Instagram posts.

Now, there seem to be alleged texts between the pair.

PETE DAVIDSON: ‘I’M IN BED WITH YOUR WIFE’

Just about a day after Kim went “Instagram official” with Pete, screenshots between Kanye and the comedian have been trending on social media. The SNL host told Kanye to “grow up” and ended with letting him know he is in bed with Kim.

“Yo it’s Skete. Can you please take a second and calm down. It’s 8am and it don’t gotta be like this,” wrote Pete in screenshots Page Six confirmed were real.

“Kim is literally the best mother I’ve ever met. What she does for those kids is amazing and you are so f–king lucky that she’s your kids mom,” he continued.

“I’ve decided im not gonna let you treat us this way anymore and I’m done being quiet. Grow the f**k up,” he added.

“Oh you using profanity now. Where are you right now?,” responded the rapper.

“In bed with your wife,” Pete replied.