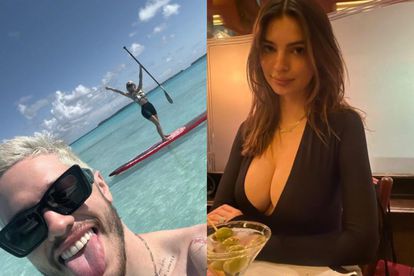 Twitter users have weighed in on reports that claim American comedian Pete Davidson is dating model Emily Ratajkowski – via tweets on Monday 14 November.

Us Weekly reported that Pete Davidson and Emily Ratajkowski are dating. A source told the publication that the pair met through mutual friends.

“Pete and Emily have been talking for a couple months now,” said a source. Adding “they’re “in the very early stages, but both really like each other.

“Pete makes Emily laugh and he loves how intelligent she is,” the source continued.

This comes after Pete’s break up from reality star Kim Kardashian. The pair called it quits after nine months of dating. The pair reportedly broke up due to long distance, Pete had been spending time in Australia shooting a film.

“Kim and Pete have decided to just be friends,” said a source to Page Six.

“They have a lot of love and respect for each other, but found that the long distance and their demanding schedules made it really difficult to maintain a relationship,” said the source.

Emily was married to Sebastian Bear-McClard but the pair ended things in July. The model was later spotted with Brad Pitt.

ALSO READ: ‘Scary concept to me’: Kim on Pete Davidson going to space

Twitter users feel Pete has the “hottest roster in history” given his dating history. While others feel like his sense of humour may be his draw card. Take a look…

“Pete davidson landing emily ratajkowski in his collection of girls he dated just shows that when girls say we like funny guys, we mean it,” wrote @bratazf.

“If pete davidson is actually dating emily ratajkowski he has to have the hottest roster in history,” wrote @carleelreed.

“Pete davidson going from ariana grande to her writing hit songs about him then kim and destroying kanyes legacy to super model emily ratajkowski from the strength of being funny is all the motivation I need,” wrote @KAZMlR.