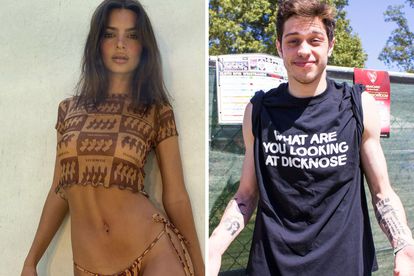 If you’re wondering what Emily Ratajkowski sees in Pete Davidson, you’re not alone!

She’s beautiful, talented, and frankly can have any guy she wants. So why the scrawny, socially awkward SNL star?

…because everyone really wants to know…

Almost every woman knows that there is something attractive about bad boys, that keep them intrigued and sadly, a sucker for punishment.

For Pete, his potty mouth and a long (very long) string of beautiful celebrity exes – including most recently Kim Kardashian, Ariana Grande, Kate Beckinsale, Margaret Qualley, Kaia Gerber, and Phoebe Dynevor – could be the thing that excites Emily dearest the most.

Oh, and he’s also “well-endowed”, claim his exes. Arianda Grande, who dated the star in 2018, claimed he had “big d*** energy” and even called his manhood “huge”. Kim Kardashian also made mention of his “BDE” during an episode of Kardashians on Hulu.

Emily Ratajkowski is fresh out of a marriage split from ex-husband Sebastian Bear-McClard, who reportedly was unfaithful, cites In Touch Weekly.

Together, the former couple have a son: Sylvester Apollo Bear.

Perhaps Pete is Emily’s chance at having single, no-strings-attached fun?

Depending on who you ask in Hollywood, Pete Davidson is one of the funniest stars of his generation.

And with Emily undergoing a messy divorce and possibly a custody battle – perhaps she appreciates some light-hearted moments in her life?

“Pete makes Emily laugh and he loves how intelligent she is,” a source told US Weekly.

Kim previously said of Pete: “He’s literally such a good person, they don’t really make them like him anymore”.

#5: THE BUZZ AROUND THEIR ‘ROMANCE’

Of course, the celebrity pairing could be a PR-stunt or perhaps they could be madly in love?