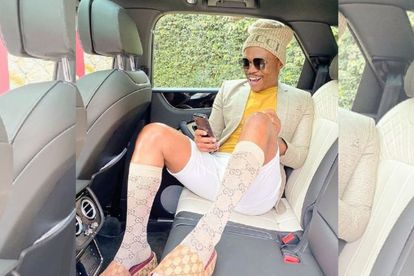 South African media personality Somizi is definitely ready to take back his life following allegations of abuse by his estranged husband, Mohale Motaung. The former Idols SA judge recently headed to social media to share a new show idea with his many fans.

According to his post, he is planning to have a show where he cooks, feeds his guests, and also tackles problems and obstacles in their lives.

The show will be called, ‘Eat Pray Love with Somizi‘

Multi-talented television and radio personality Somizi Mhlongo is seemingly making the conscious decision to pick up the pieces of his life after it was brought close to a standstill. It all started crumbling when his estranged husband accused him of emotional and physical abuse.

Soon Somizi was suspended from being a judge on Idols SA, being a brand ambassador for Bathu sneakers, and also had to take a break from Ask A Man, a radio show on Metro FM.

No longer is he taking time to reflect and is back on social media full force. In a recent post, the celeb shared an idea that he has for a new show called Eat, Pray and Love with Somizi. In a short clip, he describes that he would be cooking for his guests while they discuss life’s problems and he offers his best advice.

In the clip, he also says how he wants it to provide a holistic experience where people can have a good time while eating, laughing, and crying. He also adds that he wants to take the show on the road and provide people with 5-star food.

Somizi’s fans seemingly love the idea and headed to the comment section where they shared just how much they would love to see it materialise. Read some of their comments about the show below:

“Beautiful concept, love, and light to you my love.”

“you can’t keep a good man down”