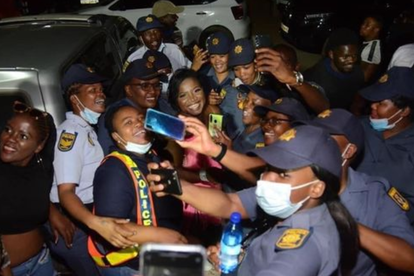 Makhadzi was slammed for using 20 police officers as security. Image via Facebook: Makhadzi

Makhadzi was slammed for using 20 police officers as security. Image via Facebook: Makhadzi

Last weekend South Africa’s star musician Makhadzi performed in the Northern Cape. Taking to her Facebook page, she shared that she was protected by 20 police officials. Soon locals flocked to the comment section to accuse the Limpopo hitmaker of misusing the police service.

Over the last few months, Makhadzi’s career has soared. The Ghanama hitmaker has been compared to the likes of Brenda Fassie and already has international bookings lined up.

With all the fame, however, she has also received her fair share of criticism and negative attention. Just a month ago she was apologising for her dark inner thighs. Weeks later she was slammed for supporting the ANC.

Now she again finds herself being dragged online after she shared a post about being protected by 20 police officers while performing in the Northern Cape.

“Last weekend I was protected by 20 police, my car, and my hotel were protected. 😭😭😭 I had a chance to ask one police and her answer was like, ‘we were told that you are coming and not more than 5 police were supposed to be not on duty.

‘But because it’s you they volunteered to come to see and protect you.❤️❤️❤️. Northern cape loves you MAKHADZI’. Shout out to all Northern Cape police who came and protect me, indeed I am living my dream 😴.#AfricanQueen.”

Netizens are not happy

After she shared the post, people soon started to question why she had not used private security. A lot of them said that she was misusing the South African Police Service. Here are some of their comments:

“We love you. But it’s not the police’s duty to be your private security guard or protection services, therefore it’s actually not a nice thing that happened. This conduct might be investigated by IPID and deep actions might be taken.

Police should fight crime, hijacking, rape, murder, abuse of women, children, and elders, robbery, illegal firearms, and drugs, and arrest the tsotsis… Not protecting you.”

“In this case, it’s private security that you must employ. That’s how it’s done. You are a business, music is business and businesses get private securities. I love you, your music, and your energy but that needs to be rectified