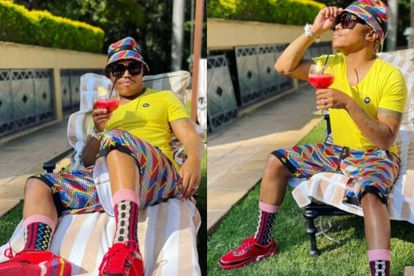 South African media personality Somizi Mhlongo revealed that he has a new man following his split from estranged husband Mohale Motaung on the latest episode of his reality show which aired on Showmax on Wednesday 6 July.

SOMIZI: ‘I’M A SUCKER FOR MJOLO’

Somizi Mhlongo revealed that he has a new man on the latest episode of his Showmax reality series, Living the Dream with Somizi. The media personality added that his new man is career driven, has his own house and car.

So, he essentially ticks all the boxes which he implied his estranged husband Mohale Motaung did not…

“I can’t afford to date a man that I still have to raise right now,” he said.

The media personality went on to explain that he needs someone with a healthy bank balance. So, he does not bother him.

“The person that I’m seeing right now, he is very comfortable,” he added.

Twitter users were not impressed with season five of the reality series. This is because they thought that the entire series was based on Mohale, as well as Somizi’s daughter Bahumi wanting to change her surname. Take a look…

“So vele season 5 was dedicated to Mohale, Somizi insisting on his innocence by mentioning at every go how much of a gold digger Mohale was and Bahumi wanting to change her surname on every episode? Hectic man,” wrote @bewildered_Ano.

“Somizi is in love again. I love this for him. Hopefully he will focus on his new love and stop harping on about what was,” wrote @SelfieRunnerZA.

“Out of all the seasons of Living The Dream, S5 was the most boring. Don’t know if it’s because of TT or what but it was just boring,” wrote @MaabuleM.