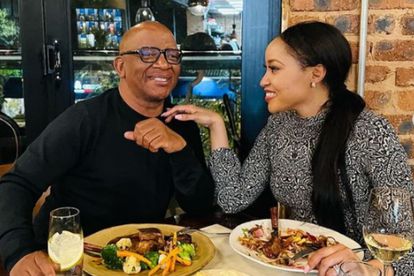 ‘My ride or die”: Producer Lebo M ties the knot for the seventh time. Image via Instagram @pretty_samuels

‘My ride or die”: Producer Lebo M ties the knot for the seventh time. Image via Instagram @pretty_samuels

Lion King composer Lebo Morake aka Lebo M secretly got married to businesswoman Pretty Samuels back in February this year. It is reported the Grammy award-winning producer is tying the knot for the seventh time!

Sunday World reports that the popular composer Lebo M, who got married for the umpteenth time to Pretty Samuels kept his marriage away from the prying media.

A source close to the couple told the publication that the couple exchanged vows in front of a magistrate and witnesses and their big wedding will happen this summer.

“They did not want to attract  media attention. You know Lebo M likes to pull out all the stops when he does something.”

It is believed the 57-year-old lives with his new wife Pretty Samuels at a golf estate in Blair Atholl, Joburg.

Samuels, who is her 40s started dating Morake after becoming the president of his foundation Lebo M Foundation.

Another source told the outlet that Morake is much calmer with his new wife, and content.

“She is not just a pretty face, there is more to her than meets the eye. She is business savvy, and works in the corporate [world] as an executive, so they complement each other well.”

HIS PREVIOUS WIVES BEFORE PRETTY SAMUELS

Lebo M married Samuels under a year after his break up from his ex-wife Angela Ngani-Casara.

Angela Ngani-Casara and the music composer went their separate ways in April 2021 after their third failed attempt at making their relationship work.

“We had hoped that the third attempt would have been the final one in both our lives. We have tried hard and we are proud of our efforts. Regrettably we simply did not connect,” the pair said in a joint statement at the time.

The music composer was also engaged to Generations: The Legacy actress Zoe Mthiyane and Mel Ntsala, paid lobola for one, and was also married to Vivica Gibson and actress Nandi Ndlovu, according to buzzsouthafrica.

Blair Atholl will be ‘a beast’ for South African Open field