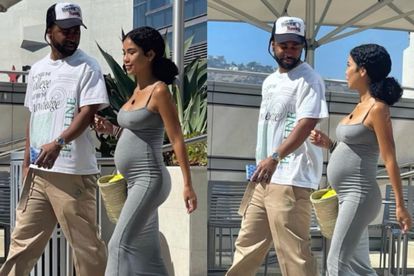 Jhene Aiko and Big Sean are reportedly expecting their first child together. Images via Twitter @new_branches.

Jhene Aiko and Big Sean are reportedly expecting their first child together. Images via Twitter @new_branches.

American singer Jhene Aiko and her longtime boyfriend, rapper Big Sean are reportedly expecting their first child together according to a report by TMZ on Sunday 3 July.

Jhene Aiko is pregnant! The singer and her boyfriend Big Sean are reportedly expecting their first child together. This will be Jhene’s second child as she already shares daughter  Namiko Love with Omarion’s brother O’Ryan.

The None of Your Concern hitmaker debuted her baby bump while out shopping with Big Sean. TMZ reports that the pair were out in Beverly Hills and Jhene looked vibrant.. And pregnant.

“Jhene Aiko and Big Sean are expecting. Wish her nothing but a healthy & peaceful pregnancy and safe delivery. They deserve this,” wrote @listenjazzfunk.

The publication reports that there is no word on how far along the singer is in her pregnancy.

Jhene began trending on Twitter as Tweeps weighed in on the news of her pregnancy. Many thought she has “fine” baby daddies – O’Ryan and Big Sean.

Others thought Nick Cannon – who is infamously known for having several kids and “baby mamas” – would be disappointed that he was not the one to impregnate Jhene.

“Nick Cannon seeing Jhene Aiko get knocked up by Big Sean and not him,” wrote @UptownDC_Rich.