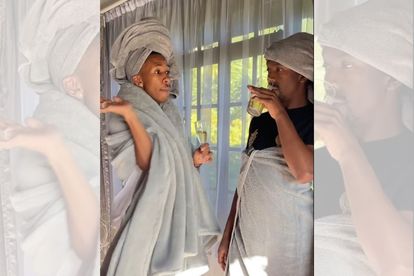 ‘IF THE OSCARS WERE IN SOUTH AFRICA’

In the clip Lasizwe and his brother Lungile Mchunu – who appears in his reality show Fake It Till You Make It – make light of the moment Oscars host Chris Rock was slapped in the face.

Lasizwe does a stellar impression of how white, black and coloured people in SA would narrate the incident at the after party.

He captioned the clip: “If the Oscars were in South Africa, this would be Lupita at the Oscars after party”.

And Lasizwe’s followers were loving it.

Meanwhile, Lasizwe has announced that he and brother Lungile will be co-starring in a brand new YouTube reality show.

In each episode, the brothers will be challenging each other to complete an activity.

“With these two, you know there’s always some fun waiting ahead”, radio presenter Ayanda MVP narrates in the official trailer.

ALSO READ: A slap in the face? Will Smith teaches boy to ‘fake slap’ in old clip [watch]