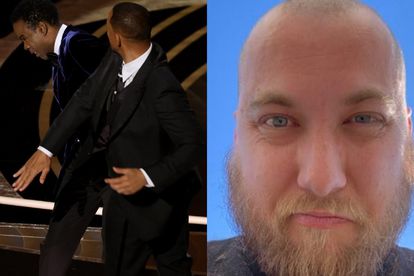 Popular YouTuber Ozzy Man has weighed in on the viral Will Smith slap in a new video. Image via Twitter @Culturecrave @OzzyManReviews

Popular YouTuber Ozzy Man has weighed in on the viral Will Smith slap in a new video. Image via Twitter @Culturecrave @OzzyManReviews

What’s a massively viral video without a satirical Ozzy Man analysis to get you cracking up and questioning the way you view some things? The cheeky online entertainer decided to give his take on the Will Smith slap that set tongues wagging on Sunday, 27 March during the live broadcast of the Oscars.

ALSO READ: ‘What about Ye?’: Trevor Noah slammed for comforting Will Smith [watch]

We’ve seen and heard many reactions to the infamous Oscar incident where actor Will Smith smacked comedian Chris Rock for making fun of his wife, Jada Pinkett Smith.

While the issue of alopecia is a sensitive one, there are always funny moments to nit-pick from viral incidents such as this one. And that’s exactly what YouTuber, Ozzy Man, did.

As a refresher, the YouTuber – who has tons of videos where he gives funny takes to sport, wildlife, and anything weird and wonderful on the internet – is also the guy who gave commentary on the overzealous South African looter who tried to fit his massive flat screen TV into the backseat of his car during the 2021 July unrest.

Ozzy Man had the following to say about the Will Smith slap:

“Will Smith has taken out the slapping championship title against an opponent (Chris Rock) that was unaware he was partaking in a slap tournament…yes, the joke was distasteful – especially given greater context – but you shouldn’t get punched in the face.”

In light of his actions on the Academy Awards stage, Will Smith issued a statement on his Instagram account, on Monday afternoon, apologising directly to Chris Rock for slapping him.

“Violence in all of its forms is poisonous and destructive. My behavior at last night’s Academy Awards was unacceptable and inexcusable. Jokes at my expense are a part of the job, but a joke about Jada’s medical condition was too much for me to bear and I reacted emotionally.

“I would like to publicly apologize to you, Chris. I was out of line and I was wrong. I am embarrassed and my actions were not indicative of the man I want to be. There is no place for violence in a world of love and kindness”.