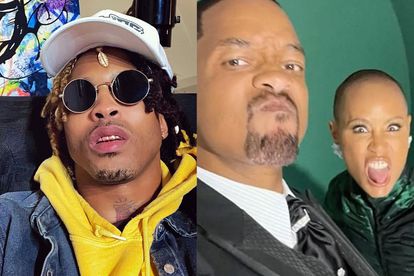 American singer August Alsina, who had an entanglement with Will Smith’s wife Jada Pinkett Smith, has seemingly shared his thoughts on choosing peace after the King Richard star’s viral Oscars slap – via an Instagram post on 29 March.

August Alsina began trending on Twitter in the aftermath of Will Smith slapping Chris Rock on stage during the Oscars ceremony on 27 March. Will slapped Chris because he made a G.I. Jane 2 joke about his wife Jada Pinkett Smith’s bald head.

Jada previously opened up about being bald because of alopecia. So, how does August fit in? Well Jada and August had an “entanglement” while she was married to Will. So, Tweeps thought Will should “keep the same energy” for August as he did for Chris.

“Choose peace; trusting that life’s intricate puzzle pieces ???? are all forming together for the greater good and mastering of the seasonally sometime chaotic nature of your life’s art piece that’s being formed and painted by birthing life to your internal masterpiece,” he wrote.

So, what exactly happened between Jada and August? The Get Ya Money hitmaker revealed he had a brief relationship with the Girls Trips star – in an interview with Angela Yee in 2020.  August claimed that Will actually gave him his blessing. This was after August was introduced to the Smiths when he befriended their son Jaden.

“I actually sat down with Will and had a conversation due to the transformation from their marriage to life partnership … he gave me his blessing,” he said.

“I devoted myself to it. I gave my full self to it. So much so that I can die right now, and be ok with knowing that I fully gave myself to somebody…. And some people never get that in this lifetime,” he continued.

Jada took Will to her Red Table Talk to address the revelations. The pair said they were privately separated at the time of the affair. Tweeps were shocked at Jada referring to her relationship with August as an “entanglement” at the time and the word trended on Twitter.

Many fans of the Fresh Prince of Bel Air star thought Jada publicly humiliated Will.

ALSO READ: ‘First time I’ve ever seen him go off’: Will Smith’s mom on his Oscars slap