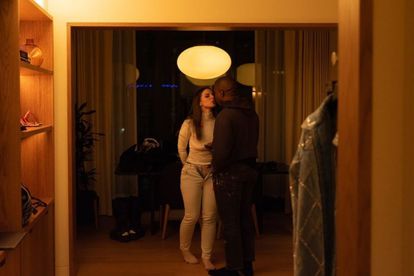 Kanye West and Julia Fox pack on the PDA for Interview Magazine. Image via Twitter @saint.

Kanye West and Julia Fox pack on the PDA for Interview Magazine. Image via Twitter @saint.

American rapper Kanye West and his “girlfriend” actress Julia Fox did an interview and photoshoot filled with public display of affection (PDA) with Interview Magazine on 6 January.

Julia Fox penned an essay about her date night with Kanye West in Interview Magazine. She expressed that she had an “instant connection” with the rapper and they went on another date to see Slave Play in New York City. The pair are said to be officially dating.

“I met Ye in Miami on New Year’s Eve and it was an instant connection. His energy is so fun to be around. He had me and my friends laughing, dancing, and smiling all night. We decided to keep the energy going and fly back to New York City to see Slave Play. Ye’s flight landed at six and the play was at seven and he was there ON TIME. I was impressed,” she wrote.

The Uncut Gems star said Kanye, who goes as Ye now, directed an entire photoshoot for her at the restaurant they dined at.

“At the restaurant, Ye directed an entire photo shoot for me while people dined! The whole restaurant loved it and cheered us on while it was happening. After dinner Ye had a surprise for me. I mean, I’m still in shock. Ye had an entire hotel suite full of clothes. It was every girl’s dream come true,” she continued.

“I don’t know where things are headed but if this is any indication of the future I’m loving the ride,” she added.

The pair did an PDA-packed photoshoot to compliment the essay. Take a look…

Twitter users are convinced Kanye is doing this for his estranged wife Kim Kardashian’s attention.

Others think Kanye is trying to turn Julia into Kim.