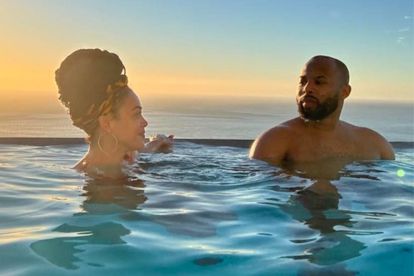 Sizwe Dhlomo has posted a loved-up picture with his mystery girlfriend…and many of his followers are utterly distraught.

The Kaya FM presenter has long kept his private life off social media, until now that is.

The outspoken star has revealed an intimate picture of the woman in his life, leaving many fans with unanswered questions.

WHO IS SIZWE DHLOMO’S GIRLFRIEND?

Sizwe Dhlomo and his rumoured girlfriend have been holidaying with a group of his friends in Cape Town, including Trevor Noah and Minka Kelly, Anele Mdoda and Khaya Dlanga.

And Sizwe had fans salivating after posting a picture of him in a pool with his girlfriend. “37th of December”, he captioned the intimate snap.

But it’s not the first time we’ve seen pictures of Sizwe Dhlomo and his bae. In 2019, the TV and radio personality and his partner visited Japan on another friendcation with Trevor and Anele.

The star posted pics of the group of besties and even one of him staring lovingly into his lover’s eyes. But what Sizwe failed to do then and now is tag the mystery woman.

Not much is known about the woman and Sizwe’s friends also make it their mission not to reveal too much about her either – or tag her either!

In a 2020 interview with Metro FM’s Breakfast Show, Sizwe revealed that he was off the market and was “not afraid” of marriage. However he also admitted that he was not prepared to share his love life with the world

But the Instagram picture was proof to many that Sizwe Dhlomo was finally off the market and unavailable, leaving his fans heartbroken