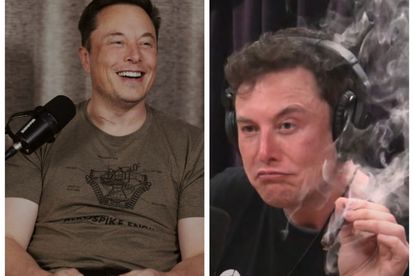 In a recent interview on ‘Full Send,’ SpaceX founder Elon Musk said he had to prove he is not a drug addict after smoking marijuana during a Joe Rogan interview in 2018. Image via Twitter @thehell88, @elonmusk/Instagram

In a recent interview on ‘Full Send,’ SpaceX founder Elon Musk said he had to prove he is not a drug addict after smoking marijuana during a Joe Rogan interview in 2018. Image via Twitter @thehell88, @elonmusk/Instagram

Tesla CEO Elon Musk has revealed the consequences of his 2018 interview with podcaster Joe Rogan in which he was filmed smoking marijuana.

During his chat with the Nelk Boys and John Shahidi on the Full Send podcast on Friday 5 August, Musk shared that he had to undergo random drug tests because his other company, SpaceX, was affected by his behaviour.

ELON MUSK REVEALS HE HAD TO UNDERGO DRUG TESTS

The South African-born billionaire recalled the backlash he received after smoking weed with Joe Rogan back in 2018, saying “it was pretty nutty.”

“I had to have random drug tests and stuff after that to prove that I’m not a drug addict,” Musk said.

He went on to explain that because SpaceX has a federal government contract and smoking marijuana is still illegal federally, therefore the company’s competitors thought the act was “brazen.”

“They drug tested me for everything… randomly. You couldn’t pick a day. It was a whole year of drug tests,” he explained.

Musk also shared that the whole SpaceX company had to undergo the drug tests, not just him.

THE TESLA CEO IS IN SUPPORT OF PSYCHEDELICS

To clarify the marijuana issue, Musk emphasised that he does not know how to smoke a joint.

When asked if he is in support of psychedelics, he replied “yes”.

“Some of them can be pretty helpful for PTSD (post-traumatic stress disorder), psychological trauma and depression… a lot of the antidepressant drugs turn you into a zombie,” Musk explained.

Psychedelic drugs, also known as hallucinogenic drugs or simply hallucinogens, are a group of substances that are usually used recreationally to change and enhance sensory perceptions, thought processes, and energy levels, and to facilitate spiritual experiences.

According to the Alcohol and Drug Foundation website, examples of psychedelic drugs include LSD, magic mushrooms, Mescaline and DMT which are usually swallowed, smoked or inhaled.