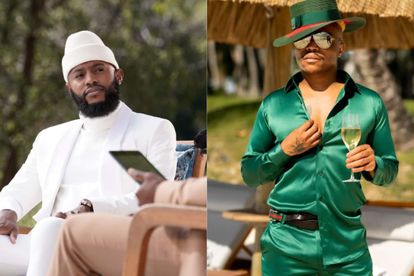 Twitter users suspect that media personality Somizi Mhlongo took a vacation to Mauritius at this time because his estranged husband Mohale Motaung’s Showmax special about their marriage was released – on Thursday 4 August.

SOMIZI ON VACATION AS ‘MOHALE: ON THE RECORD’ RELEASES

Tweeps feel that Somizi Mhlongo took a vacation because he wanted to be “seen living his life” while he trended on Twitter over his estranged husband Mohale Motaung’s Showmax special.

The media personality is on vacation in Mauritius with his friend Ndo Maleho as well as influencer Mihlali Ndmased and her rumoured husband Leeroy Sidambe.

The Idols SA judge and his friends seem to be on vacation in Mauritius as they tagged their location as One&Only Le Saint Géran. Take a look…

Mohale: On The Record officially released on Thursday 4 August and dropped quite a few bombshells about his marriage to Somizi.

Twitter users expressed that they feel Somizi went on vacation because of Mohale’s special being released. Take a look…

“I see why Somizi went on vacation, especially today. That long awaited Mohale interview happens tomorrow and he wants to be seen living his life whilst he trends..clever one,” tweeted @JollyHaute.

“I see why Somizi went on vacation. This long awaited Mohale interview he knew it be displayed today and he wants to be seen living his life whilst he trends… that old man he’s clever!” wrote @TumiThuledi.

“Somizi went on vacation cuz he knew the Mohale interview will be aired today and he want to act like he’s unbothered,” tweeted @sewelankoana.