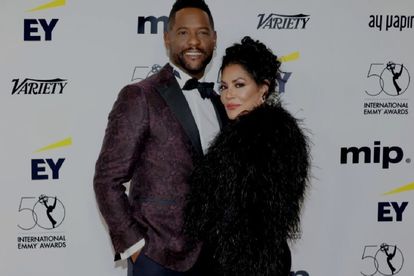 Actor Blair Underwood is engaged to his friend of 41 years. Photo via Getty Images: Dio Dipazite

Actor Blair Underwood is engaged to his friend of 41 years. Photo via Getty Images: Dio Dipazite

The Madea Family Re-Union star shared a photo of himself posing on the 50th International Emmy Awards red carpet with the new lady in his life.

“My personal highlight was walking the red carpet with my new fiancée Josie Hart,” Blair Underwood captioned his Instagram photo.

He further described his fiancée as “the most amazing, brilliant, beautiful, hilarious, thought-provoking, and insightful person” he knows.

“The future is crazy-bright, Girl! None of us ever know where God will guide our paths,” he happily expressed. “She’s had my back since before I even became an actor. When a 41-year friendship slaps you in the back of the head & blossoms into romance, you stand up, pay attention & step forward in gratitude. Gently forward. It begins!” the Emmy award winner.

SPLIT FROM WIFE OF 27 YEARS

In 2021, the actor seperated from his ex-wife Desiree DaCosta after 27 years of marriage.

In May that year, the ex-couple released a joint statement announcing their split and expressing what a beautiful journey it’s been for the both of them.

Blair Underwood, 58, and his former wife share three kids together: Paris, 24, Blake, 19, and daughter Brielle, 22. In the statement, they cited their children as their “proudest achievement.”