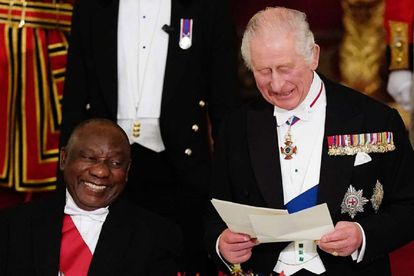 South African president Cyril Ramaphosa has just wrapped up his two-day state visit to the UK where he wined and dined with King Charles and Camilla, the Queen Consort.

But whilst the president put his best foot forward mingling with the royals at Buckingham Palace, the king also attempted to impress his guest – whom he incorrectly called “Ramafoza” – as well as trying his hand at several official SA languages.

On Tuesday evening, King Charles hosted President Cyril Ramaphosa at a state banquet, also attended by his son and heir Prince William, and his respective wife Kate, the Princess of Wales.

According to MailOnline, the extravagant occasion hosted an audience of 163 guests, including other members of the Royal Family and politicians from both countries.

In his welcome speech, King Charles paid lip service to SA’s official languages – seven of them to be exact.

He said: “Welcome, Avuxeni, Dumela, Sawubona, Molo, Molweny, Ndaa. My wife and I are delighted to welcome you to Buckingham Palace this evening. Mr. President, If I may, I would like to give you our belated but very best wishes for your birthday last week.”

In a clip that has gone viral on social media, Ramaphosa is seen beaming and whispering the words “wow” whilst the king made greeted in Sesotho, Setswana, isiXhosa, isiZulu, Tshivenda, Xitsonga, and English.

King Charles also made mention of Queen Elizabeth’s fondness of Mzansi: “The late Queen had the great pleasure of hosting Presidents Mandela, Mbeki and Zuma for State Visits to the United Kingdom, at all of which I was present.

“On each of those occasions, she expressed her admiration for your country and its people, its vibrancy, natural beauty, and diversity”

Cyril Ramaposa was also dragged for his reaction of sheer delight.

@sirboring_26: “Cyril acting like a side chick being finally invited to the family braai”

@Olwethusibiya26: “This is how we got colonised”

@KayKay_84: “All that fanfare and he couldn’t bother to pronounce the man’s name properly”

@QueenRobz: “Wow, wow. Cyril is impressed by what Google translate can do”

Celebs also had their say too about King Charles and Cyril Ramaphosa.

Siv Ngesi posted: “They say a few words in our language and we give them so much credit when we speak their language fluently! President is way too excited! This is how they distracted us while they stole our riches”