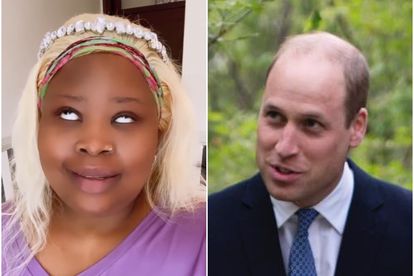 Coconut Kelz has done it again with another tongue-in-cheek spoof. This time the South African satirist is taking a jab at Prince William, whose recent comments on war in Europe have gone viral.

Introducing herself as the “cousin of Wills”, Kelz – played by Lesego Thlabi – addresses the recent controversy.

This week Prince William faced widespread backlash after he claimed that the conflict in Ukraine is “alien” to witness.

The second in line to the British throne kicked off a social media storm after speaking to a group of volunteers at the Ukrainian Cultural Centre in London this week.

According to a viral tweet by reporter Nadine White, Prince William reportedly said: “It’s very alien to see this in Europe. We are all behind you”. The tweet also hinted that the royal claimed it was “normal” to see bloodshed in Africa and Asia.

However, the Press Association and reporter Richard Palmer have apologised after they claimed William’s comments were “misheard”.

According to PA, Prince William actually is heard saying: “Everyone is horrified by what they are seeing. It’s really horrifying. The news every day, it’s just, it’s almost unfathomable. For our generation, it’s very alien to see this in Europe. We’re all right behind you. We’re thinking about you. We feel so useless.”

The royal did not mention Africa nor Asia in his comments. Despite this many tweeps have taken aim at Prince William for his “racist undertones”.

Speaking in her latest video, Coconut Kelz dragged Prince William for his comments, insinuating that both the royal and his family were “racist”.

Kelz captioned the clip: “Howzit guys… I’m speaking on behalf of cousin Wills. 1000s of years of violent colonialism & wars does not mean we’re used to it in Europe. We usually are violent to OTHER (black) nations”.

Watch the video below…