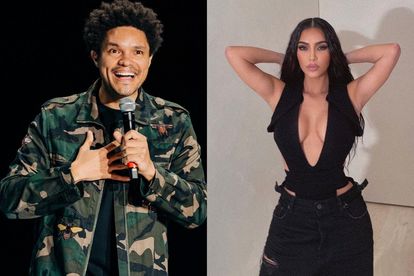 South African-born comedian Trevor Noah slammed American reality star and businesswoman Kim Kardashian over a controversial comment she made about working hard – on an episode of The Daily Show on 11 March.

Kim Kardashian along with her sisters and mom Kris Jenner did an interview with Variety for the publication’s cover shoot. This was to promote their upcoming Hulu show The Kardashians.

Kim had tongues wagging when she made a controversial comment about hard work. The reality star asked women to get their “f***** a****” up and work. She went on to say that people just don’t like to work anymore.

“I have the best advice for women in business. Get your f***** a**** and work. It seems like nobody wants to work these days,” she said.

The Skims founder’s comment angered many which caused an uproar on social media. Trevor Noah was one of many who clapped back at the reality star.

Trevor thought Kim’s comment could come off as condescending. This is because she comes from a rich family and therefore a place of privilege compared to other women.

Trevor explained that Kim was born to a lawyer father, Robert Kardashian and an athlete of a step father Bruce Jenner (now Kaitlyn Jenner).

“Here’s the thing that maybe Kim Kardashian doesn’t understand. It can come off as extremely condescending to tell women the reason they are not successful is because they are too lazy to get off their a*ses and actually work,” he said.

“Because, yes, Kim Kardashian works hard but you know who else works hard? Women. But you know what a*ses don’t have? It’s Kim’s luck to be born into a rich family,” he continued.

Take a look at the clip…