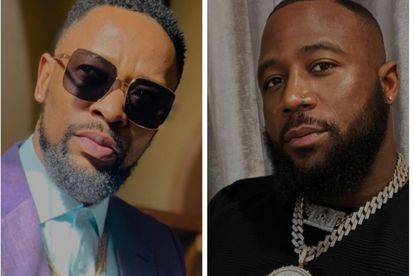 An oral sex video of a man who bears an uncanny resemblance to Cassper Nyovest has resurfaced. Image via @skcoza @caspernyovest/Instagram

An oral sex video of a man who bears an uncanny resemblance to Cassper Nyovest has resurfaced. Image via @skcoza @caspernyovest/Instagram

Another oral sex video is doing the rounds on social media and it appears to be a clip of a man who bears an uncanny resemblance to rapper Cassper Nyovest.

According to social media users, the video is old and Mufasa, as the musician is affectionately known, addressed it back in 2020.

The clip comes a day after SK Khoza set tongues wagging when a video of him performing oral sex on an unidentified woman went viral.

Unlike SK’s video, the resurfacing clip that was and still is being linked to Cassper, does not show his face in full view.

The leaked sex tape features a man and a woman engaging in oral sex. Although it isn’t clear who is behind the camera, the man performing the act looks up a few times to face it.

What lead to the video being linked to the Siyathandana hitmaker is that the man in the video bears an uncanny resemblance to him. Also, he is wearing a durag and has a beard, just like the rapper.

“Haynina, is this Cassper, pulling an SK Khoza on us as well,” one tweep said.

However, some tweeps have defended Cassper and dismissed the video as old.

When the video went viral in 2020, Cassper took to his Twitter to address the issue as his fans were tagging him.

At the time, the hip-hop artist was preparing for the premiere of his Amadimoni music video on YouTube and used the opportunity to promote it.

The musician also added that he has a nose ring and tattoos, unlike the man in the video.

“Nose ring, tattoos on my shoulders, to top it off, ke tswa Maftown mara tsa go mafa tsone ha se tsaka [I’m from Maftown but m*ffing is not my thing.. Lol… come on bro, try something else,” he explained.

In the comments section, one tweep told him not to deny it as they didn’t see anything wrong with it, but Cassper replied with a screenshot of the pornstar’s Twitter handle to vindicate himself.