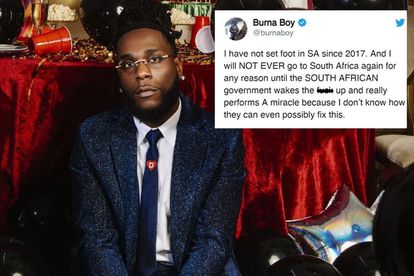 Burna Boy is set to perform in South Africa in September, but tweeps have called on him to ‘apologise first’ or face another boycott.
Image via Twitter
@burnaboy

Burna Boy is set to perform in South Africa in September, but tweeps have called on him to ‘apologise first’ or face another boycott.
Image via Twitter
@burnaboy

Burna Boy has announced plans to return to South Africa in September – despite his vow not to – but South Africans are demanding an apology from the Nigerian hitmaker first.

The Grammy-winning star previously promised to not step foot in SA following a series of xenophobic attacks in 2019.  He also cancelled a show later that year after his life was threatened by angry South Africans.

But will he follow through with his gig at the DStv Delicious International Food and Music Festival on Saturday 24 September?

BURNA BOY, AKA AND XENOPHIC ATTACKS

In it, he encouraged black foreigners living in SA to “defend and protect themselves” against South African attackers. He also warned rapper AKA to “beef up security”, in a threatening tweet that has since been deleted.

Burna Boy then vowed to never return to Mzansi. He tweeted:  “I have not set foot in SA since 2017. And I will NOT EVER go to South Africa again for any reason until the SOUTH AFRICAN government wakes the f**k up and really performs a miracle because I don’t know how they can even possibly fix this”.

AKA retaliated by demanding an apology from Burna Boy, who refused. He tweeted: “All we want is an apology. We know SA is not perfect, but we took you in as our own before you reached these levels. You say you are an African giant, prove it”.

Later that year, Burna Boy shocked South Africans after promising to perform in the country in the Africans Unite anti-xenophobic concert at the Sun Arena. Burna was set to share the stage with fellow Nigerian star Jidenna and SA rapper Kwesta.

He shared in a tweet about the concert: “The first of many! Part of the proceeds will be donated to the victims of xenophobic attacks on me”.

However, due to public backlash and threats of violence, the concert was cancelled.

With his strained relationship with SA, many tweeps wondered if Burna Boy would follow through with a concert in the country

Others called on Burna to apologise or face another boycott.

@klesetedi: “Let’s unite and cancel him till he apologises”

@KgomotsoKuts: “We told you to never set your foot here until you lodge an apology to South Africans for supporting crime and calling South Africans xenophobic for condemning it”

@pastorthys: “I demand a written apology to me as a South African”

@YUNGZVY: “We ain’t going and his album is TRASH”

We have not forgotten. Did he apologize? If no then he must futsek!! pic.twitter.com/vKpVQMsXlq

However, some tweeps have called on South Africans to leave the past in the past. Entertainment blogger Phil Mphela tweeted: “Part of being an adult is that you can change your mind. Allow Burna Boy to be an adult”.